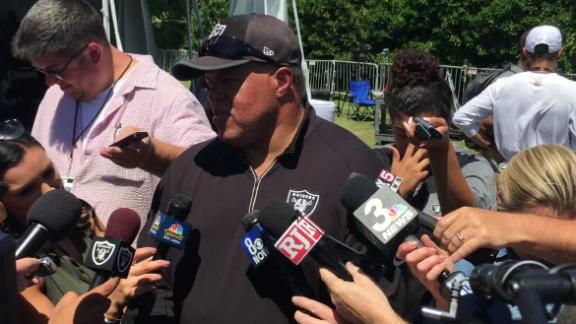 NAPA, Calif. -- While Oakland Raiders general manager Reggie McKenzie called Pro Bowl left tackle Donald Penn "my guy" on a few occasions Monday, McKenzie reiterated that he would not negotiate in the media as Penn's holdout reached its third day.

Penn signed a two-year, $11.9 million contract with the Raiders in March 2016. While he purportedly wants his deal to reflect his standing as a top-10 tackle in the league -- his scheduled $5.8 million base salary for 2017 ranks 11th among tackles, per ESPN Stats & Information -- the two sides are at a stalemate.

With Penn sitting out, Marshall Newhouse has flipped from right tackle to left tackle to open training camp.

"We don't talk contracts unless the guy is here," McKenzie said. "Donald's my guy. I love him to death, you know? Ever since he stepped right in when we lost [Jared] Veldheer, I told him, 'You're my guy.' And that's not going to change. Would love to have him.

"If you guys [reporters] could go down to L.A. and drive him up, I'd appreciate it."

"But we're just going to focus on these young guys and practice and get those guys some reps, and we're going to just keep moving," McKenzie said. "We've got to practice."