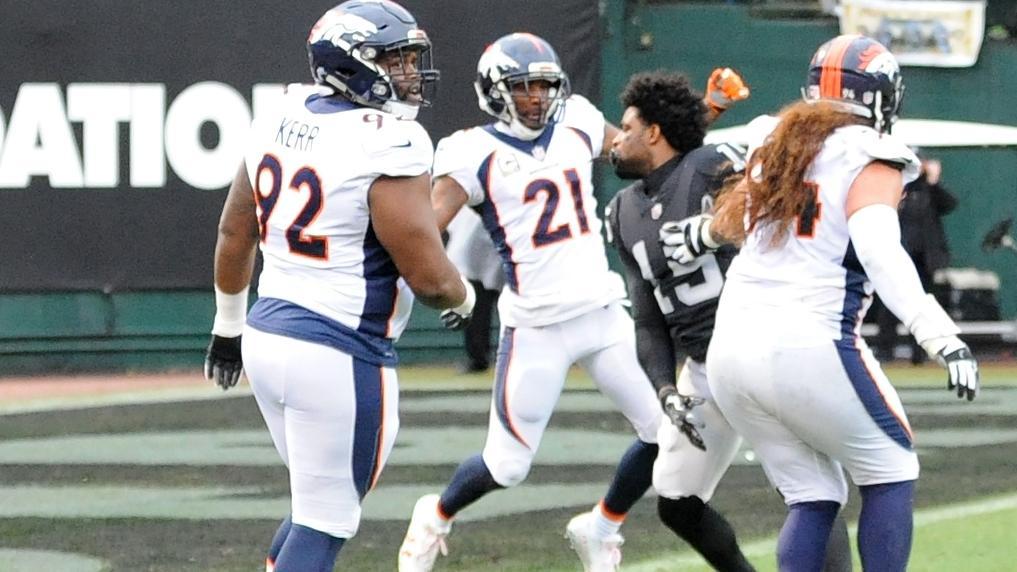 ENGLEWOOD, Colo. --Denver Broncos cornerback Aqib Talib and Oakland Raiders wide receiver Michael Crabtree were each suspended for two games on Monday, one day after the two players were ejected from Sunday's game for fighting.

NFL vice president of operations Jon Runyan announced the suspensions Monday night, and each player was notified in writing. In his letter to Talib, Runyan referenced Talib ripping a chain off Crabtree's neck, "aggressively'' removing Crabtree's helmet and throwing a punch and the two players "reigniting'' the fight for a second confrontation. Runyan added, "Such actions have no place in this game, engender ill will between teams and lead to further confrontations.''

In his letter to Crabtree, Runyan cited the wide receiver for punching Broncos cornerback Chris Harris Jr.in the stomach on the play that preceded the fight with Talib and said Crabtree's actions with Talib "triggered a melee and endangered various sideline and League personnel, including one of the Game Officials who was injured trying to maintain control of the situation.''

Joseph said he addressed the incident at Monday's team meeting.

"We can't lose our best corner in a game like that," he continued. "It obviously hurt us down the stretch. I told our guys, if we can defuse those things, we have to defuse them. We can't fall into the trap of getting into a fight that ends up losing one of our best players. We can't do it."

Meanwhile, in Oakland, Raiders coach Jack Del Rio said earlier Monday that he had yet to speak with Crabtree.

Del Rio also said at the time that he didn't anticipate Crabtree or Jackson would be suspended.

"That's for the league to decide," Del Rio said of Crabtree. "I would hope not. Based on what I saw, I wouldn't think there would be that type of reaction."

On a second-and-6 play from the Raiders' 24-yard line on Oakland's second possession of the game, Crabtree blocked Talib during a 5-yard run by Marshawn Lynch. Crabtree kept pushing Talib out of bounds near the Broncos' bench.

Talib and Crabtree then exchanged shoves before they threw punches at each other. Talib said Monday that Crabtree threw a punch at him first. As he did in a game last season, Talib ripped a chain off Crabtree before the fight.

Because of the previous incident, Crabtree had taped the chain to his body before the game, sources told Schefter. Talib still got it.

Several other players from both teams joined in along the Broncos' sideline. Talib eventually got ahold of Crabtree's helmet, pulling it out of a crowd, and tossed it toward the stands.

"I came out there to play football on Sunday. I don't really know what he came out there to do. ... He came out here on this extra stuff, so one thing led to another," Talib said Monday. "It's unfortunate. I wish it didn't happen, but it happened, so just have to move on."

After initially being removed from the group, Talib and Crabtree reignited things in the end zone.

Asked whether he believed he would be fined or suspended by the league -- or both -- Talib said he hoped the entire incident would be considered.

"I hope the league sees how it started. ... I didn't come out there to fight or wrestle with him," Talib said.

Harris said after the game that Crabtree punched him in the stomach one play before the fight between Talib and Crabtree. Harris stayed down on the field after the play "because I lost my mind" and then, as he walked off the field, motioned toward the Raiders' bench that Crabtree had punched him.

"I didn't defend Chris. [Crabtree] punched Chris," Talib said. "Next play he came and punched me. So he was on his whatever he was on."

Crabtree did not address the media, but fellow Raiders receiver Cordarrelle Patterson said he was not surprised by the fight.

"We all knew it was going to happen," Patterson said. "It was just a matter of time, when. Everybody was ready, prepared for it.

"I don't beef on the football field. I love my money too much. You start fighting, you get fined and get kicked out the next week and losing all that money. I really ain't got time for that, man. So I just go out there and just try to make friends with everybody."

Del Rio deflected when asked whether, considering the history Crabtree has with Talib, he had spoken with his receiver about keeping his emotions in check before the game.

"We were all about finding a way to beat the Broncos," Del Rio said. "That's all."

Joseph said Monday afternoon that he wouldn't consider any additional discipline for Talib and would wait for the NFL to hand something down. Talib was suspended for one game in the 2015 season for poking then-Indianapolis Colts tight end Dwayne Allen in the eye.

"I told our guys I don't want it, but once it happens, how does a guy not defend himself? Punches are being thrown, helmets are off. I don't want it to happen, but if it does happen, you can't blame a man for defending himself. I want our guys to simply defuse and walk away. That's what I want." 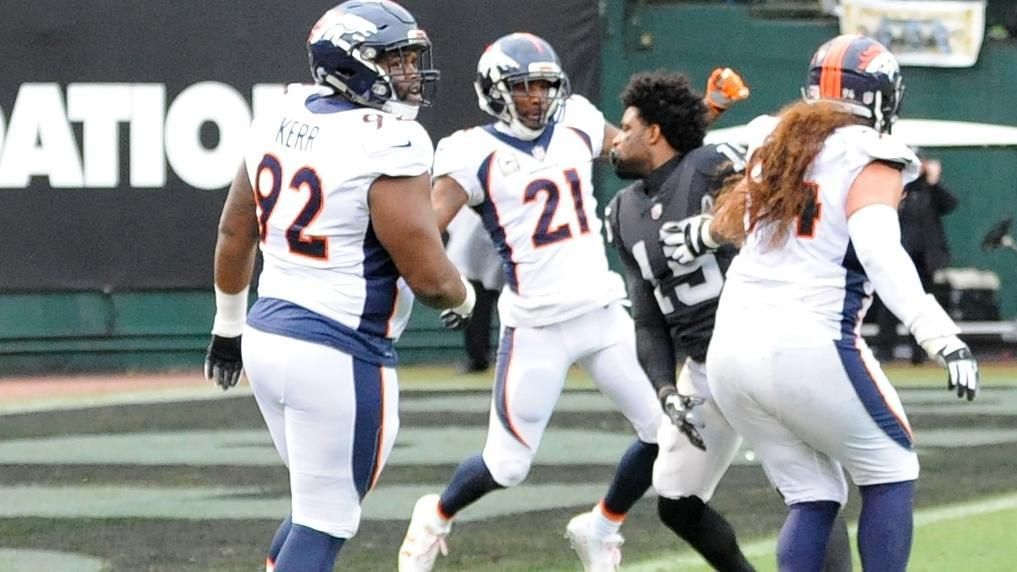