Rams have discussed bringing Peyton Manning to L.A. in 2016 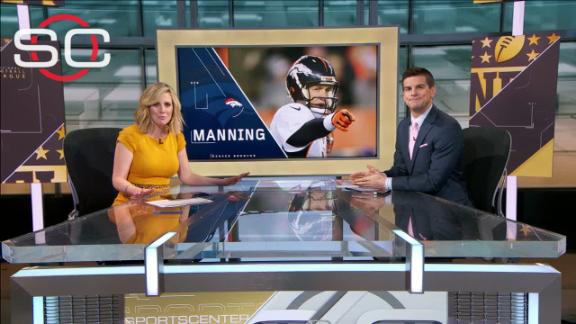 ESPN
By Adam Schefter
TheRamshave had internal discussions about bringing Peyton Manning to Los Angeles should he want to play another season, per a league source.

Manning still is under contract to the Broncos for another year, but most around the league do not expect him to return to Denver next season, if he returns at all.

Manning still must decide whether he wants to play after this season, and the Rams still are formulating their quarterback plans. But they are monitoring the Manning situation, per a source, which is a sign that the Broncos quarterback could have options next season.

It also sets up the possibility -- even if it is remote -- that Manning could finish his career in Southern California, just as former Colts quarterback Johnny Unitas did with the San Diego Chargers in 1973 and former New York Jets quarterback Joe Namath did with the Los Angeles Rams in 1977.

Rams coach Jeff Fisher said at his season-ending news conference that Case Keenum is the team's starter entering the offseason and Nick Foles and Sean Mannion will be around to compete. The Rams traded for Foles last offseason and signed him to an extension, but the former Philadelphia Eagles starter lost the starting job to Keenum during the season.

Super Bowl 50 will be Manning's fourth title game in 18 seasons. Given that he came back from spinal fusion surgery in 2011 to play four seasons for the Broncos, along with the injuries that have dotted his past three seasons, including the left foot injury that forced him to miss seven games this season, there have been signs for weeks that Sunday's game might be Manning's last.

Information from ESPN.com's Jeff Legwold and Nick Wagoner was used in this report.

Rams view Peyton Manning as option in 2016
Field Yates reacts to the report that the Rams have had internal discussions about bringing Peyton Manning to Los Angeles should he want to play another season.

Peyton not thinking past Sunday
Chris Berman asks Peyton Manning if the 2015 season is his final, Manning isn't looking past the task at hand.
Related topics:
sportsespnstories about the city of los angelesnfldenver broncospeyton manningst louis rams
Copyright © 2020 ESPN Internet Ventures. All rights reserved.
More Videos
From CNN Newsource affiliates
TOP STORIES
A Day On BART 2020: What riding the trains is really like