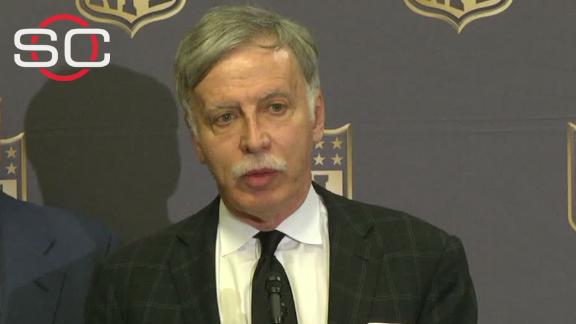 ST. LOUIS -- St. Louis is a two-time NFL loser. Both times, the issue was the stadium.

In 1988, the city lost the Cardinals to Phoenix over dithering about a new facility that team owner Bill Bidwill eventually built in the desert.

This time, the Rams are leaving because of a no-win lease that gave the franchise an out if the Edward Jones Dome wasn't deemed to be in the top quarter of facilities in the league.

While Stan Kroenke relocates the franchise to Inglewood, California, with plans for a lavish stadium, it's back to the bricks for the St. Louis NFL Stadium Task Force, which has a $1 billion plan and fancy artists' renderings for a riverfront stadium that could also house an MLS franchise but no prospective tenants.

The task force said the decision "concludes a flawed process" and it planned no "news events" the rest of the week.

"We will leave it to the NFL to explain how this could happen and hope the next city that may experience what St. Louis has endured will enjoy a happier and more appropriate outcome," the task force said in a statement.

St. Louis Mayor Francis Slay on Wednesday said the city felt like it was "being led on" and has "no appetite" for seeking another NFL team, based on what he called the dishonest way St. Louis was dealt with over the stadium issue.

"They were not being truthful," Slay said of the NFL. "And they knew we were putting a lot of energy into this."

For now, the city that Kroenke harshly criticized for a lagging economy and that has long been labeled a "baseball town" is left with two professional teams.

"I thought the crowds were very good when I was here," said Dick Vermeil, who coached the Greatest Show on Turf team to the franchise's lone Super Bowl title in the 1999 season. "They were unbelievable when we turned the team around, and they were good when we were not going good."

"Historically, you put something out there people are proud of, they show up," Mozeliak said.

State and civic leaders who banded together in an effort to keep the Rams in town are feeling jilted.

"The NFL and Stan Kroenke have displayed a callous disregard for the St. Louis area and its loyal football fans," St. Louis County Executive Steve Stenger said in a statement.

Added Slay: "The NFL ignored the facts" and fans "who supported the team through far more downs than ups."

Missouri Gov. Jay Nixon called the vote to approve the move "a clear deviation from the NFL's guidelines."

"It is troubling that the league would allow for the relocation of a team when a home market has worked in good faith and presented a strong and viable proposal," he said.

Fans echoed those sentiments after ponying up for personal seat licenses and season tickets without a winning record for the past dozen years.

Brian King was 6 years old when the Rams arrived in 1995 and his father purchased season tickets. Until last year, one of the family cars was a '93 van that had a Rams tire cover on the back and Rams magnets on the doors.

Over the years, King estimates the family spent around $50,000 following the team, including trips to training camp in Macomb, Illinois.

"I'd say I wasted a lot of hours reading about relocation -- hours I'll never get back," King said.

Vermeil said he loved Kroenke during the Rams' glory years in St. Louis, when Georgia Frontiere was owner. Kroenke was then minority partner and was often seen glad-handing with players and media in the locker room on game days.

"He was absolutely outstanding," Vermeil said. "How I've explained it in the past is he had enough money to be any kind of guy he wanted to be."

Not enough money -- or desire -- to stay in St. Louis, though. In the relocation application, Kroenke said a team willing to accept the St. Louis stadium deal would be on a path to "financial ruin."

"We have negotiated in good faith with the Regional Sports Authority for more than a decade trying to find a viable and sustainable solution," Kroenke said in a statement. "When it became apparent that we might not be able to reach an agreement, it was then and only then that we looked at alternatives."

Dwindling attendance was cited on the Rams' relocation application. It didn't note that there had been four winning seasons in 21 years, with all of them coming in a five-year stretch that former coach Mike Martz often referred to as a "special place in time" and that featured high-powered offensive juggernauts led by Kurt Warner and Marshall Faulk.

Overwhelmingly, the Rams have been a flop in St. Louis. Included in their current 11-year playoff drought is a five-year stretch in which they averaged just three wins per season -- the worst such period in league history.

Until 2006, every home game was a sellout. None was this year, which perhaps strengthened Kroenke's case.