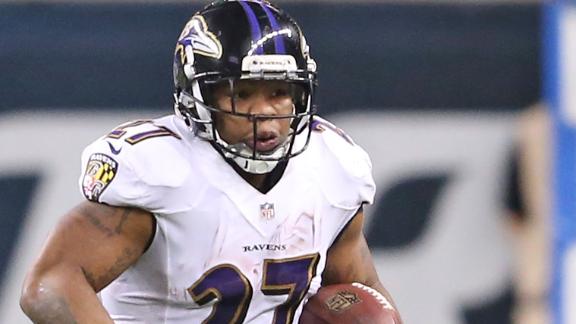 Conviction of a third-degree crime in New Jersey carries a potential prison sentence of at least three years and up to five years, and a fine that could be up to $15,000.

A video obtained and posted online by TMZ showed Rice lifting Palmer by her arms out of an elevator and laying her on the floor. Rice's attorney, Michael Diamondstein, has said the footage is authentic but incomplete.

"I have been advised by the prosecutor's office that an indictment has been returned," Diamondstein told ESPN on Thursday afternoon. "And again, we deny that he committed an aggravated assault. We don't think the law would support that [he did]. And we just ask the public to reserve judgment until all of the facts are out."

The Ravens released a statement Thursday that read: "This is part of the due process for Ray. We know there is more to Ray Rice than this one incident."

Rice was one of three Ravens players to be arrested in a 22-day period. Backup wide receiver Deonte Thompson was arrested for possession of marijuana on Feb. 21, and reserve offensive lineman Jah Reid was arrested on two misdemeanor charges of battery on March 9.

Ravens owner Steve Bisciotti has said Rice has a future with the team despite his arrest.

Rice, 27, signed a five-year, $35 million contract with the Ravens before the 2012 season. He is coming off his worst season, rushing for only 660 yards and averaging a career-low 3.1 yards per carry.

Earlier Thursday, Diamondstein told The Press of Atlantic City that neither Rice nor Palmer wants to move forward with the case.

"We vehemently deny that Mr. Rice committed an aggravated assault," he told the paper. "Both Mr. Rice and Miss Palmer are together, they are happy and they're in counseling."

Ray Rice Indicted
ESPN NFL Insider Field Yates breaks down the latest goings-on between the Ravens and RB Ray Rice in light of his indictment on charges of third-degree aggravated assault.

Rice Indicted For Aggravated Assault
Roger Cossack discusses the latest on Ray Rice being indicted by a grand jury for third-degree aggravated assault.