Raymond Felton: I can still play 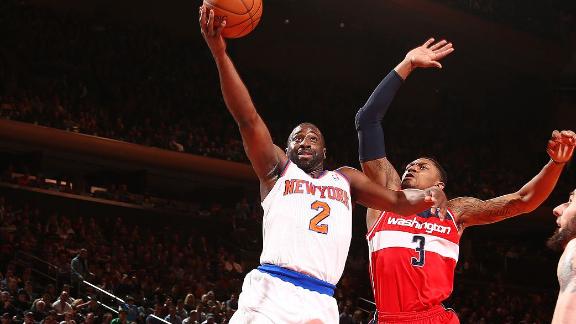 DALLAS -- Point guard Raymond Felton admits he played poorly for the New York Knicks last season and looks forward to proving he still can play "as an elite point guard" with the Dallas Mavericks.

"When you come off a season like I had last year, there's always a point where you've got to prove yourself coming back the next season. And trust me, I look forward to it."

Felton, a nine-year veteran with career averages of 13.1 points and 6.5 assists per game, is likely to start for the Mavs, who would prefer to keep soon-to-be-re-signed point guard Devin Harris as a spark plug off the bench.

Felton struggled last season while dealing with off-the-court distractions. He averaged a career-low 9.7 points and 5.6 assists, shooting only 39.5 percent from the floor. He faced felony gun charges stemming from a February arrest that occurred after the attorney of his then-estranged wife turned over his loaded, semi-automatic handgun to police, and she alleged that Felton threatened her with the firearm.

Felton, whose divorce was recently finalized, reached a plea deal in June to avoid jail time. He acknowledges that his personal situation affected his performance during the Knicks' disappointing 37-45 season.

Felton, who made similar comments to the New York media in the summer of 2012 after an underwhelming one-season stint in Portland, denied that poor conditioning was a factor last season. However, Felton said he's "probably in the best shape I ever been in in the past four or five summers," in large part because he's determined to have a bounce-back season.

"I've got a lot of things that motivate me this summer," said Felton, who is due $3.79 million this season and has a player option for $3.95 million in 2015-16. "I'm just really getting after it, just working extra, extra hard. I'm not really doing anything different, just doing it more and working at it harder."