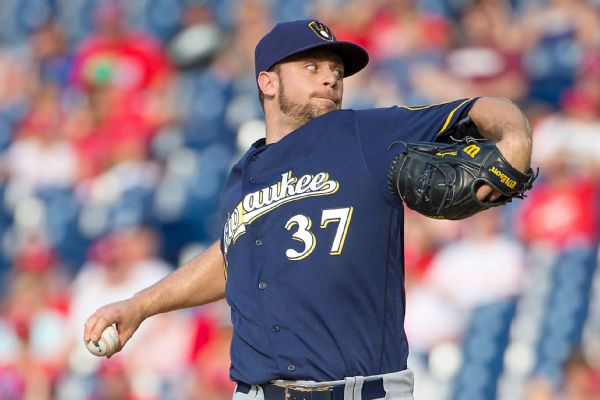 NATIONAL HARBOR, Md. -- With one trade here Tuesday morning, the Boston Red Sox found an eighth-inning reliever and maintained what little financial flexibility they have in order to sign a left-handed hitter andstill stay below the luxury-tax threshold.

Oh, and they renewed their faith in Pablo Sandoval.

Thornburg, a hard-throwing 28-year-old, posted a 2.15 ERA, 13 saves and 12.1 strikeouts per nine innings in 67 appearances last season, taking over as Milwaukee's closer after Jeremy Jeffress was dealt to Texas at the trade deadline. Red Sox manager John Farrell cited a lower arm slot as the primary reason for Thornburg's breakthrough as a power pitcher, while president of baseball operations Dave Dombrowski called Thornburg's curveball a "dominant pitch."

"We feel like we're getting a guy at the absolute right time," Farrell said.

But Thornburg also dealt with elbow issues that caused him toget shut down midway through the 2014 season. He received a plasma-rich platelet injection that year and hasn't encountered any recurrence of the injury during the past two seasons.

The Red Sox were looking for an eighth-inning upgrade, an addition that Dombrowski labeled "a necessity."Koji Uehara and Brad Ziegler, who shared the role at times last season, are both free agents. Dombrowski said Monday that the Red Sox preferred to find a setup reliever with closing experience to pitch in front of closer Craig Kimbrel.

Thornburg fills that description. He also is inexpensive, no small detail for a Red Sox team that is trying to keep its payroll below $195 million for luxury-tax purposes. Thornburg made $513,900 this year and is eligible for arbitration for the first time. The Red Sox will control him through the 2019 season.

"We scouted him very thoroughly last year. He has nasty stuff," Dombrowski said. "We feel he's a guy that projects to be a quality eighth-inning individual for us that can also close a game if needed. He was what we were looking to try to find."

Thornburg joins a bullpen that includes Kimbrel, right-handers Matt Barnes, Joe Kelly and Heath Hembree and lefties Robbie Ross Jr., Robby Scott and Fernando Abad. Right-hander Carson Smith is working his way back from Tommy John surgery and could be ready to pitch by June 1, if not sooner.

"You see what clubs have been getting for closers and setup guys," Dombrowski said. "Really, (Thornburg) could be a closer in many situations. It's a very either expensive dollar market or it's an expensive acquisition market."

And the Sox paid a steep price in talent,in particular by trading Dubon.

Dubon, 22, batted .323 with six homers and an .840 OPS between Class A Salem and Double-A Portland this year, putting him squarely on the prospect map. Dubon is primarily a shortstop, though, and is blocked by Xander Bogaerts, the 24-year-old All-Star who isn't eligible for free agency until after the 2019 season. The Red Sox also have utility man Brock Holt, Marco Hernandez and Deven Marrero to back up Bogaerts.

The decision to include Shaw in the trade underscores what Dombrowski and Farrell said Monday, namely that the Red Sox intend to trust Sandoval with third base after he missed almost all of 2016 because of shoulder surgery.

Sandoval, signed by the Red Sox to a five-year, $95 million contract two seasons ago, struggled in 2015, reported to spring training out of shape and lost the third-base job to Shaw. And although Shaw faded after the All-Star break, he still finished with 16 homers in 480 at-bats, production from the left side of the plate that can't be discounted in a lineup that will lean right-handed now that David Ortiz is retired.

On Monday, Farrell called Sandoval "one of the keys for us" and "a left-handed bat who is a proven guy and has every opportunity to make a major impact on our team this year."