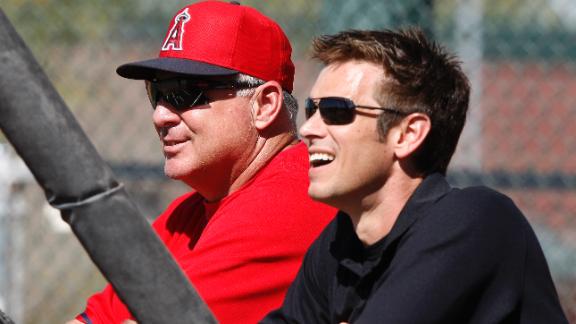 The Los Angeles Angelsmight have to fight in order to defend their AL West title, but right now they're battling each other.

Angels manager Mike Scioscia and general manager Jerry Dipoto are at odds over on-field strategy and the use, or lack thereof, of scouting reports and advanced metrics, according to a Fox Sports report.

At the heart of the matter, according to the report, is the managerial staff's reluctance to share with players scouting reports provided to the coaches by the front office in regards to defensive shifts and opposing batters' tendencies at the plate.

Over the weekend, Dipoto, unhappy with the coaching staff's decision to rely more on "feel" than data, according to the report, expressed his frustration during a series of meetings. Dipoto's message was met with a heated rebuttal from at least one coach as well as slugger Albert Pujols, the report stated.

Pujols responded to questions about the tension within the organization prior to the team's home game against the New York Yankees.

"Whoever leaked that story, it's really embarrassing, because we're supposed to be family here," the veteran first baseman said.

Scioscia addressed the report before the Angels beat the Yankees 2-1 on Tuesday, largely insisting that vehement closed-doors discussions are being misconstrued as an unbridgeable disagreement between the longest-tenured manager in baseball and the Angels' new-school top executive.

"I'm passionate, he's passionate," Scioscia said. "We know about baseball and about doing well, and that's usually a good thing. ... I'm not going to comment on what happened or didn't happen, but I can only tell you that it will not be a distraction to these guys."

Scioscia acknowledged the Angels have changed the way they distribute information from scouts, with the statistical reports now going straight to the players instead of through the coaching staff. Yet Scioscia, the Angels' manager since 2000, insists he values advanced analytics. He disagreed with the notion he is at odds with Dipoto because he relies more on baseball instinct.

"We get the players prepared, and it's been working, especially our game plan on the pitching side," Scioscia said. "Whether you're a team president or a GM or a manager or a coach, there's always heavy discussion. But it's good, because you're trying to get to the best decision."

Scioscia and Dipoto have had an uneven relationship, with similar issues between the two arising most notably in both 2012 and 2013. Angels owner Arte Moreno decided to keep both men and force them to work out their differences.

"There's really nothing to say about anything that might or might not have happened," Scioscia said after Monday night's game. "Jerry and I work together the same way we've worked the last couple of years, and that's where we are."

The stakes were raised for the Angels this season after they won the AL West last year by 10 games. However, the team has floated around .500 this season and lost both Josh Hamilton and Howie Kendrick.

Scioscia is in his 16th season as Angels manager and is in the midst of a 10-year deal that runs through the 2018 season, although he can opt out following this season.