Rex Ryan 'not bitter' about Bills' firing, but 'I was hurt by it' 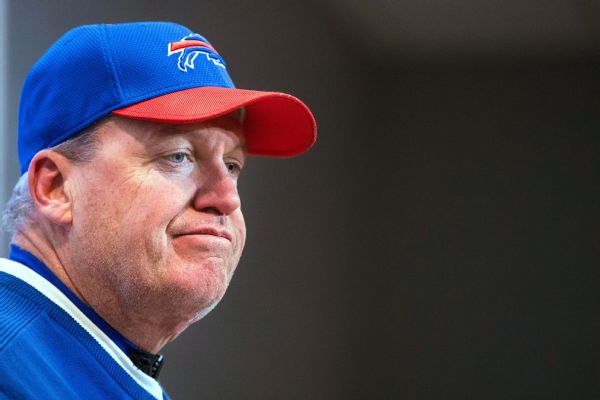 Former Buffalo Bills coach Rex Ryan has no interest in becoming a defensive coordinator and plans on spending at least the upcoming season as a television analyst, he told the New York Daily News this week.

"The one thing about [being on TV] is that you don't lose," Ryan told the newspaper in his first interview since being fired Dec. 27 by the Bills. "You'll remember every damn loss. But the wins? You don't necessarily remember. So, it takes a lot out of you. I'm tired of getting f---ed. Unless it's a real situation [as a coach], there's no sense of getting into it again."

ESPN announced Monday that Ryan will join Sunday NFL Countdown this week to help break down Super Bowl LI. Sports Business Daily reported CBS, Fox and NFL Network have also reached out to Ryan to serve as an analyst following his firing in December. The Daily News reported Ryan has yet to choose which job will suit him best.

Ryan has three years remaining on the five-year, $27.5 million contract that he was given by the Bills in 2015.

"I'm really not that bitter [about being fired] and maybe that $15 million [remaining on the deal] is one of the reasons," Ryan told the Daily News. "I'm not bitter, man. ... Yeah, I'm hurt. I was hurt by it. There's no question. But bitter ain't how I feel. I'm like, 'Shoot, if they never wanted me here, then fine. I ain't here. I'm not your coach anymore. Fine and dandy.'"

Bills owner Terry Pegula told the Associated Press earlier this month that he fired Ryan after the coach pressed ownership about his future prior to the regular-season finale.

Ryan, who went 15-16 in almost two seasons in Buffalo, stripped his pickup truck of its red-and-blue theme and replaced the Bills' logo with Clemson decals.

"I stripped that damn truck the day I got fired," Ryan told the newspaper. "F--- you guys.

"I set the expectations too high. Like, boy, that's a shock. In a way, I felt, why not us? I stepped in where the head coach [Doug Marrone] had quit [following the 2014 season], the defensive coordinator [Jim Schwartz] had quit and the quarterback [Kyle Orton] quit on them. So, I thought that it was important at the time to say, 'You know what? Shoot, I believe in you. And I'm proud to be the coach here.' Every bit of that was true. I put that truck around town. I was all-in. Even though those other three had quit, I wasn't a quitter. I was ready. And I wanted to be there. and I wanted to win. And I thought I could win."

Ryan cited injuries to star receiver Sammy Watkins as well as top 2016 draft picks Shaq Lawson and Reggie Ragland as reasons why he was not "real lucky" in Buffalo.

"At the end of the day," Ryan said, "I'm responsible for the product on the field.