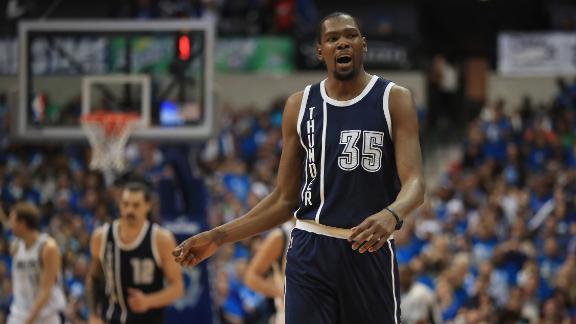 DALLAS -- Mavericks coach Rick Carlisle made a point to call out the Oklahoma City Thunder -- and specifically Kevin Durant -- for taking unnecessary cheap shots that led to confrontations during Dallas' lopsided home loss in Game 3 of their first-round playoff series Thursday night.

"There were four, what I would categorize as non-basketball physical escalations that were initiated by them, including one intentional, unprovoked elbow at the free throw line, which I didn't understand," Carlisle said Friday. "And I've never seen a guy like Kevin Durant ever do that to a player. Then ultimately, that led to two more escalations between the teams, the fact that that was missed. I'm concerned about that. There's no place for that in our game."

Carlisle was referring to a Durant elbow that hit reserve center Salah Mejri in the chest while they were fighting for rebounding position after a free throw during the third quarter. The blow caused Mejri to fall to the ground, and he animatedly complained to the officials about the elbow during a timeout seconds later.

Late Friday afternoon, the NBA announced that Durant has been assessed a technical foul for a "physical taunt" as a result of his elbow to Mejri's chest.

Felton, meanwhile, was angered after being elbowed in the face by Adams when they were boxing out under the basket. Adams, a 7-footer, laughed when confronted by the 6-foot-1 Felton.

"Like, you're that much bigger than me, what you need to elbow a little guy like me to get a rebound? I didn't like it, so I let him know that. But whatever, it's over with now. I ain't trippin' no more. You can smile and laugh all you want to. You ain't just gonna hit me in my face and think everything's sweet. But like I said, I'm gonna let bygones be bygones."

The other confrontation occurred later in the third quarter, after Thunder shooting guard Andre Roberson lowered his shoulder and ran over Mavs star Dirk Nowitzki, who was setting a screen. Nowitzki got up and shouted his displeasure at Roberson.

"I didn't like how he ran through the screen right there," said Nowitzki, who found humor in the situation because he played with Roberson's father two decades ago with a German pro team. "It's the second time it happened, but that's really it."

Carlisle wanted to make sure the issues were raised again Friday, repeatedly referring to the Thunder as the initiators. Oklahoma City holds a 2-1 edge in the series entering Game 4 in Dallas on Saturday night.

"We're not looking to do it unless it's within the rules," Carlisle said. "But there were some things that I know are going to be looked at today, that going into Game 4, we're going to be ready for."

Carlise calls out Durant, Thunder for dirty play
Stephan A. Smith reacts to Mavericks coach Rick Carlise calling out Kevin Durant and the Thunder for playing dirty in their first-round playoff series.