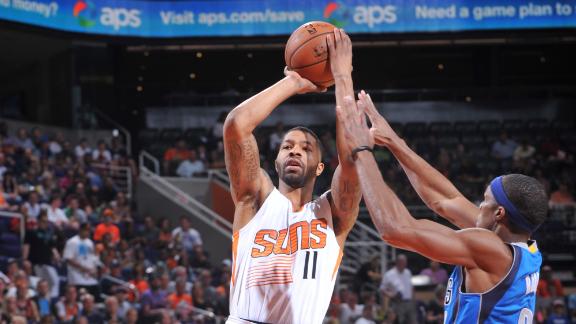 PHOENIX -- Coach Rick Carlisle ripped the Dallas Mavericks after Sunday's 98-92 loss to the Phoenix Suns, saying something is wrong with the soul of a team that frequently fails to compete at an acceptable level.

Carlisle was irate about a first half that he called a "no-show" and "an embarrassment, flat-out." The Mavs trailed the Suns by 15 at the half, prompting an angry rant in the locker room from the coach.

"This is a Dallas Mavericks hard-play problem, all right?" Carlisle said, focusing on the Mavs' poor effort in the first half, after they blew a six-point lead in the final six minutes of the loss. "We don't play hard all the time. And that's a problem.

The Mavs are 8-8 since the All-Star break and have not put up much of a fight in several of their losses, seven of which have been decided by 10 or more points.

This is the second time in two weeks that a prominent member of the Mavs has publicly criticized the team's lack of competitiveness. Center/forwardAmar'e Stoudemiredelivered a similar message to his teammates in the locker room and to the media after a home blowout loss to the Cleveland Cavaliers on March 10.

Why can't the Mavs consistently play with the kind of effort expected of professionals, much less a playoff team?

"I think that's a question you've got to ask them," Carlisle said, referring to the players. "I have my theories, but I'm not going to air them out publicly. I aired things out in there at halftime, and I've said enough for one night as far as that goes. If you've got questions about strategies and specific things, I'll answer them. But in terms of the soul of the team, you've got to ask those guys."

The Mavs who spoke to the media -- a group that did not include guard Monta Ellis, who refused to answer questions after a 4-of-22 shooting night -- were searching for answers.

"I don't know the answer to that question," said center Tyson Chandler, whom the Mavs consider their emotional leader, as they did during their 2011 title run. "That's a deep question. Something with the soul? That is a question that I cannot answer.

"I'm going to always show up to fight every night. I'm gonna compete. I feel like we've got guys on this team that compete. I don't know why we're not doing it as a whole. I don't know. Like I said, I'm going to continue to challenge guys, continue to challenge myself, continue to make a push because at the end of the day, we have to get prepared for the playoffs. We can't have these types of performances, or it's going to make for a short-lived playoff experience and long offseason."

Added small forward Chandler Parsons: "I don't know. We need to figure it out, though. We can't continue to keep doing this. I don't know how many times it needs to happen for us to wake up and not allow it to happen.

The Mavs fell to 44-27 with the loss. They're sitting in seventh place in the West and appear to be far from playoff-ready with only 11 games remaining in the regular season.

"I just think we've got to have longer stretches like we had in the second half," said power forward Dirk Nowitzki, the face of the franchise. "Teams are too good these days, and maybe we're not that good where we can just coast and turn it on and decide to play and steal a win, especially on the road. We've just got to do longer stretches, play harder."

The Mavs responded to Carlisle's halftime rant by dominating the third quarter. Dallas led by six points with 7:14 remaining but scored only two points the remainder of the game as the Suns rallied.

"Second half, we got angry and we played a hell of a lot harder, which we have to do all the time, but we made too many mistakes," Carlisle said. "Hey, the basketball gods are gonna get you when you don't show up and play for 24 minutes. That's what happened tonight."