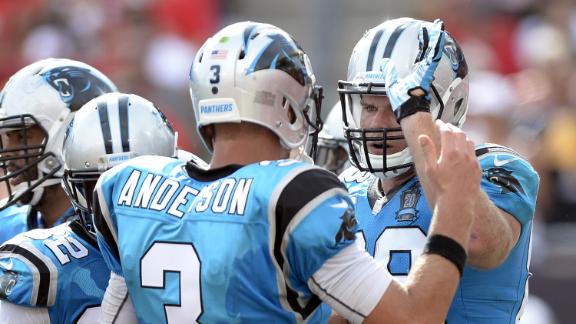 The Panthers held the two-time Pro Bowler out of Sunday's 20-14 victory at Tampa Bay as a precaution after doctors told coach Ron Rivera a hit in the wrong place could sideline Newton even longer.

"The way it was explained to me, this one week would make a big difference for him," Rivera said Monday. "So I feel very confident, very comfortable going forward with him."

Rivera said Newton underwent treatment on Monday, and on Wednesday "I expect him to be ready to roll."

Even though there will be another evaluation at the end of the week, Rivera expects Newton to be under center against the Lions.

But Rivera conceded that sitting Newton wasn't easy, particularly after the quarterback looked good on Friday and Saturday and knowing he could make a difference for a team that hadn't won an opener since 2008.

"It was tough," Rivera said. "The conversation I eventually had with him was hard. It was very hard on me. It was probably one of the toughest decisions I've had to make.

"But at the same time, it was a decision I had to make. In the long run, win or lose, we're better off now. He'll be another week into his recovery, which the doctors were all pointing to. If we can get to this point, we will all feel much more comfortable about his situation. So we were able to accomplish it and still win."

Derek Anderson, making his first start since the 2010 season for Arizona, completed 24 of 34 passes for 230 yards and two touchdowns against Tampa Bay.

Rivera said one of the things that made it easier to sit Newton, who lobbied the coach to change his mind, was he felt comfortable with Anderson.

Newton, however, did make Rivera uncomfortable at least once during the game. It happened in the second quarter when, during a timeout, the first pick of the 2011 draft ran onto the field and stuck his head into the huddle.

Rivera, as he was instructed, spoke to a league official about that Monday.

"It was a nice conversation," he said.

Rivera said what Newton did wasn't fineable, nor was there risk of Carolina being penalized because it occurred during a timeout. But Rivera made sure Newton understood the rule moving forward, having the official explain there shouldn't be a reoccurrence.

"It's like sometimes being a parent, the kids won't listen to you, but the authorities they will listen to," Rivera said. "So I asked [the official] to come over and Cam settled down.

"But that's who Cam is, too. He's an excitable guy. He wants to be part of it. It's hard to stop him. He was good after that."