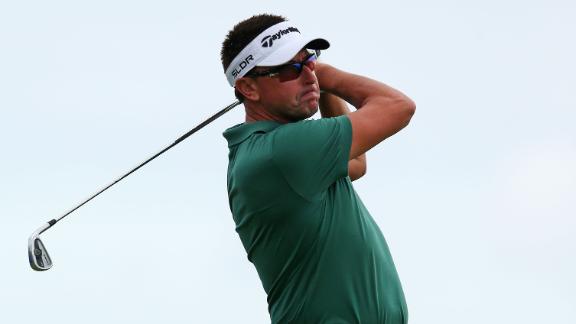 Australian golfer Robert Allenbyhas disputed the notion that conflicting details provided by an apparent witness to the aftermath of his alleged kidnapping, robbery and assault this past weekend raise questions about the truth behind the story.

Allenby, in text messages to the Golf Channel, speculated that a homeless woman who described finding him bloodied on a Honolulu street corner was "getting paid" to relay false details to media.

"It's such a shame that people are focusing on whether the story is true," Allenby said in the texts, according to the Golf Channel. "I say you only have to look at me to see the truth."

Charade Keane told an Australian TV station she saw him only a mile from the restaurant where he had dinner and drinks Friday night -- not the six miles away that Allenby says is where he was dumped by his assailants.

"Not feeling great," Allenby added in the texts to the Golf Channel. "Can't open my eye. Haven't been able to sleep. Thinking about going to the hospital."

Allenby, who has decided to skip this week's Humana Challenge, has said he doesn't remember everything that happened after dinner at a wine bar on Friday night after missing the cut in the Sony Open.

He said he has no recollection of what happened until he was shoved out of a car then kicked and prodded by homeless people.

Keane, who is homeless but lives in Ala Moana park, said in a separate interview with the Honolulu Star-Advertiser she couldn't avoid seeing Allenby sitting on a planter with a bloodied face early Saturday. Allenby was talking to two homeless men she knows.

"They started arguing when I got there, and I realized this wasn't well," she told the newspaper. "I needed to get him out of here."

As she and Allenby walked away, he said all his belongings were gone, she said.

A young man in the military later helped Allenby and paid for a taxi to get him back to his hotel, Keane recalled. While they waited for the taxi, Allenby told her about his golfing career and his children.

The Sony Open is one of several Hawaii sporting events that receive direct funding from the state.

"This was an unfortunate incident, and anytime something like this involves a visitor to our island the (tourism authority) takes the situation very seriously," Hawaii Tourism Authority vice president David Uchiyama said in a statement. "It is also very important to remember that this was an isolated incident, and Hawaii remains one of the safest travel destinations in the world."

Honolulu police were investigating the case as a second-degree robbery.