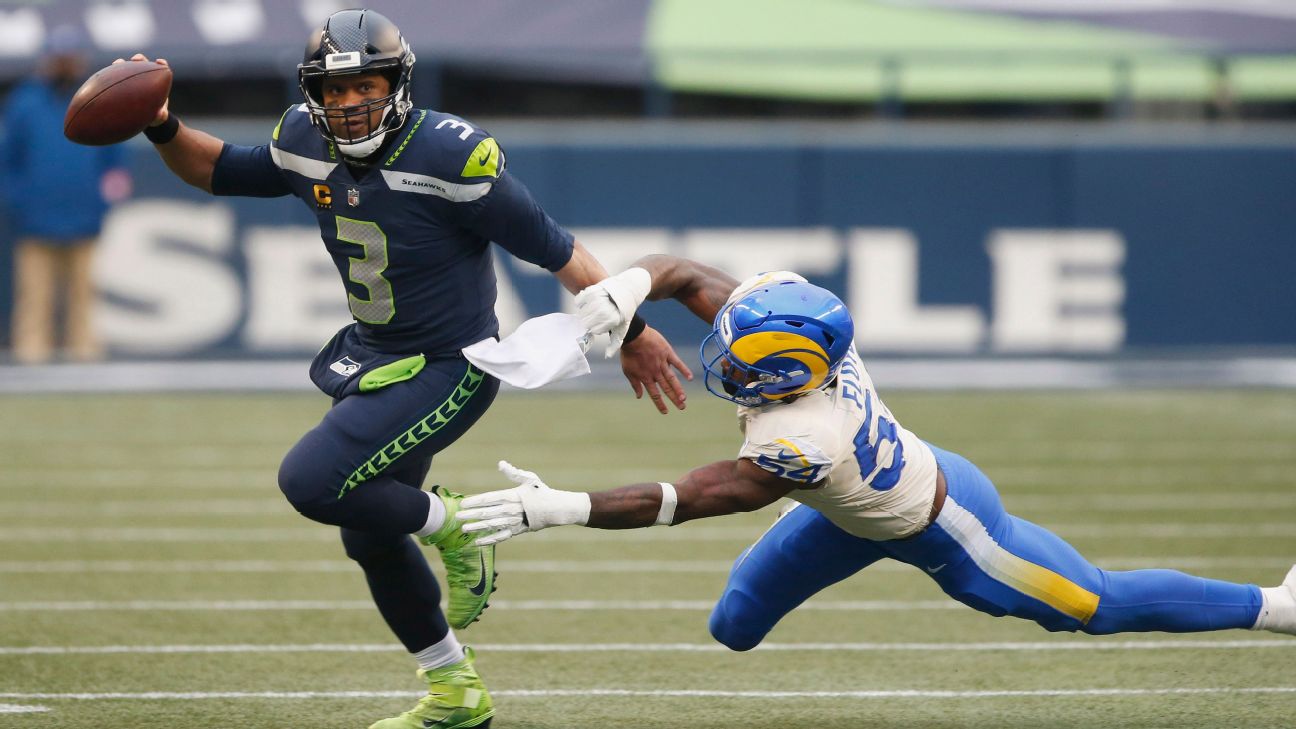 The Russell Wilson saga continued to evolve Thursday, as ESPN's Adam Schefter reportedthat while the Seattle Seahawks' Pro Bowl quarterback hasn't demanded a trade from the franchise where he has played all nine seasons of his career, his agent has a wish list in case that scenario comes to pass.

With the Chicago Bears, Dallas Cowboys, Las Vegas Raiders and New Orleans Saints as Wilson's targets in a "in case of trade, break glass" situation, we asked our NFL Nation reporters from each of those teams to lay out their case for Wilson, and what it might take to bring in the star quarterback. Also, we look at what it might take for the Seahawks to part with the most decorated signal-caller in franchise history.

Why the Bears are attractive to Wilson: The Bears are desperate for a franchise quarterback, and Wilson would be viewed as a hero if he were to get them over the hump. Chicago is sick of seeing Aaron Rodgers and the Packers dominate the division. Someone who could unseat them would become an instant legend in a city that loves its sports stars.

How doable it is -- and what comes next: GM Ryan Pace might need a job-saving quarterback acquisition considering he has struck out with Mike Glennon, Mitchell Trubisky and Nick Foles. So if the Bears are on Wilson's list, then Pace owes it to the franchise to put together the best offer he can muster and hope the Seahawks change their mind and decide to deal him. -- Rob Demovsky

Why the Cowboys are attractive to Wilson: There are obvious on- and off-the-field considerations. On the field: Ezekiel Elliott, Amari Cooper, Michael Gallup, CeeDee Lamb, Tyron Smith, Zack Martin and La'el Collins come to mind. The Cowboys have one of the most talented offenses in the league. They also play in a division that is a lot easier than the NFC West. Off the field, the Cowboys' brand sells. While Wilson already is one of the better-known players in the NFL, his brand would multiply attached to the Cowboys' star.


What the Cowboys would have to give up: Multiple first-round picks at the least. The Cowboys have the 10th overall pick in this year's draft, which would help, but they would have to give up future first-rounders if not more picks and maybe some players just to land him. And if you're asking about tradingDak Prescott, well, they can't. He's a free agent and even if they place the franchise tag on him for a second straight year, Prescott would have to sign the tender before any trade could be facilitated. He effectively could shut down any trade talk simply by saying no or making sure Seattle meets every financial demand he would have.

How doable it is for your team -- and what comes next: Anything is doable, but the Cowboys are committed to Prescott. They have made him their priority and believe he is their quarterback for the present and future. If the Cowboys get frustrated in upcoming talks with Prescott's agent regarding a long-term contract, perhaps they visit this option, but it seems remote at best. -- Todd Archer

Why the Raiders are attractive to Wilson: Wilson's skill set, with his willingness and ability to extend plays with his legs, is closer to what Jon Gruden wants to do on offense, which can be elite when not bogged down by a depleted defense which, by the way, the Raiders just hired the architect of the Seahawks' Legion of Boom, defensive coordinator Gus Bradley, to fix. So there's familiarity for Wilson there, as well as with offensive line coach Tom Cable, who had the same role when the Seahawks won Super Bowl XLVIII. Plus, imagine all the marketing opportunities for the Q Rating-conscious Wilson in the glitz and glamour of Las Vegas. Perhaps Ciara can even get a residency on The Strip?

What the Raiders would have to give up: With visions of Ken Stabler for Dan Pastorini in 1980 dancing in Raider Nation's head, how about a starter-for-starter swap -- Wilson for Derek Carr? The Raiders would have to throw in another pick or player as well just to offset Wilson's $32 million cap number for 2021. Carr has a cap number of $22.125 million, while Marcus Mariota has one of (drumroll, please) $11.35 million. Now, it's hard to see Seattle taking both QBs for Wilson, but one or the other would have to be involved (Carr) and then Las Vegas would have to find a suitor for the other (Mariota).

How doable it is -- and what comes next: Very. But is there an appetite to move on from a QB coming off his career-best statistical season? From the pure financial standpoint, shedding the cap numbers of Carr, who has $2.5 million in dead money, and Mariota, who has zero dead money, to get Wilson makes it nearly a wash (the Raiders would still have more than $1 million to shed). Gruden and GM Mike Mayock have long said they will always kick tires on players to see how and if a certain player will improve the roster. Expect tire-kicking to commence, then, as Wilson, 32, has three years remaining on his contract but a lot of mileage on his legs, and Carr, who turns 30 next month and has two years left on his deal, is no doubt growing weary of the yearly offseason speculation. -- Paul Gutierrez

Why the Saints are attractive: No team on Wilson's wish list is more Super Bowl-ready than the Saints, who have the NFL's best record over the past four seasons. New Orleans has one of the league's most talented rosters from top to bottom -- including superstar playmakers in Michael Thomas and Alvin Kamara and a very good offensive line. As a bonus, Wilson would get the chance to succeed Drew Brees, whom he grew up idolizing as a fellow undersized QB. The one drawback is New Orleans' salary-cap situation, which could make it difficult to keep this roster together long term.

What the Saints would have to give up: This seems like the biggest hurdle, since the Saints don't pick until 28th in this year's draft and likely wouldn't pick much higher in future years with Wilson at QB. It's hard to believe they could make the best offer unless Wilson gives Seattle no other choice. The Saints would likely be willing to give up a wealth of draft picks, perhaps three first-rounders. But they would probably have to include some elite talent, whether that be Thomas, Kamara, CB Marshon Lattimore or OTs Ryan Ramczyk and Terron Armstead. That could also help New Orleans absorb Wilson's cap hit.

How doableit is -- and what comes next: It wouldn't be easy, since the Saints have limited draft value to offer -- and since they're projected to be $65-70 million over this year's salary cap. But they would be foolish not to consider it with Brees heading toward retirement. The Saints can find ways to push most of those cap costs into future years (including Wilson's) just as they did throughout Brees' tenure. They might have to trade or release a couple of core assets to make it work, but Wilson would be worth it. The Saints are built to win now with so many stars in their prime (and several others like DE Cameron Jordan, LB Demario Davis, DBs Malcolm Jenkins and Janoris Jenkins in their 30s). -- Mike Triplett

What could the Seahawks be looking for in a Wilson trade? The Seahawks by no means feel as though they have to trade Wilson, especially since the situation has not escalated to the point where he has asked to be dealt. They believe that scheme changes under new offensive coordinator Shane Waldron will reduce the hits and sacks on Wilson, thus alleviating one of his major sources of frustration.

But one of the core organizational philosophies is that they'll consider everything. At the right price, they'd have to consider trading Wilson. Logically, that price would include much more than the two first-round picks (and then some) they gave up last year for safety Jamal Adams. That offer would likely have to either (A) include a young quarterback the Seahawks believe they would win with right away or (B) put them in position to draft that quarterback. They would then supplement their roster around that inexpensive rookie contract the way they did when they won Super Bowl XLVIII and nearly repeated as champions the following year, which was before they gave Wilson his first megadeal. -- Brady Henderson 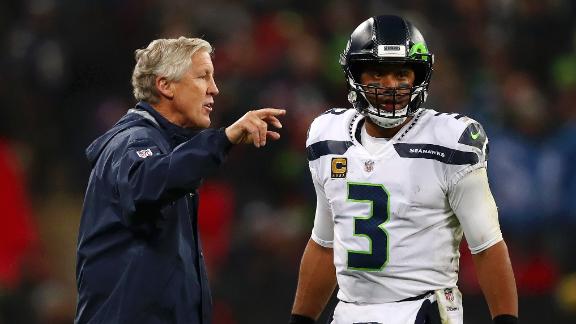