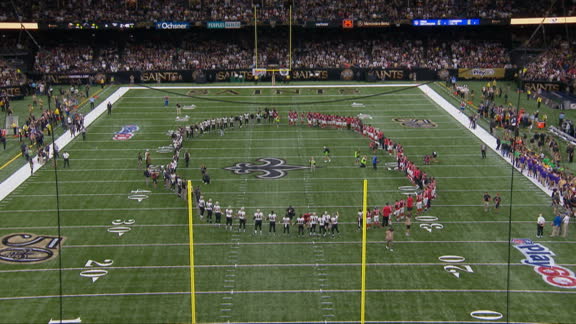 NEW ORLEANS -- The Saints and Falconscame together for a display of unity Monday night, joining hands in a circle on the field following the national anthem.

ESPN's Lisa Salter reported from the sideline during the broadcast that Saints coach Sean Payton reached out to Falcons coach Dan Quinn with the idea earlier in the week and that player leaders from both teams loved it. The coaches left it up to their quarterbacks, Drew Brees and Matt Ryan, to come up with the exact way for that statement to be both unifying and respectful of the national anthem.

Payton and Quinn figured it was a great way for players to join the growing protests around the NFL against injustice in America while still making it a message about unity, especially with two longtime rival teams from culturally rich cities. They planned to spend a minute holding hands in thought and prayer.

"I reached out to Drew [Brees] and just told him we were on board," Ryan said. "But I think the big thing was, I mean, obviously, everybody knows what's been going on throughout this entire year and for a long time. And people think things need to change. We all felt like the best way to do it was everybody do it together. And we wanted to send a message loud and clear that unity is probably the best way to make a change, and I thought that came across loud and clear tonight."

The gesture was inspired by the latest police shootings in Charlotte, North Carolina, and Tulsa, Oklahoma, this past week. A source suggested to Salter that a handful of players had been feeling outside pressure to join the cause, but they didn't want to do it at the expense of the teams.

"We'll probably come up with something before Sunday. We just want everybody to be on the same page, and we want it to be unity," said Ingram, who has strongly supported the message of San Francisco 49ers quarterback Colin Kaepernick and others who have protested during the national anthem and who said more than once Friday that his "heart is hurting."

"We want it to be all, everybody, because that's what we're trying to do. We're trying to bring everybody together. Our nation needs to come together. Everybody needs to care for each other," Ingram said. "And that's what's so good about sports. It brings everybody together, no matter what race. These are my brothers in here. Guys I played with in the past, those are my brothers. You don't see color. You just see a guy who you work hard with and go to battle with and work with every single day.

"I understand that there's differences when you go out to the real world, so we just want to set an example, and we want to bring unity. We want everybody to be together and don't want to do anything that causes division or controversy."

Brees was one of the most vocal critics of Kaepernick and his decision to use the national anthem as his forum for protest. Brees said he supported Kaepernick's message but "wholeheartedly" disagreed with his method because he found it disrespectful to the flag and the sacrifices of military members.

"It's a serious issue," Brees said after the Falcons' 45-32 victory Monday, "and we felt like an appropriate way to show our unity and bring attention to that was by making that circle together, everybody lock arms, take a moment of silence, to pray, to be in thought, meditation, whatever you want to do. ... [It was] the way we would like to give attention -- after the national anthem -- in a way that shows we're all in this together."

Falcons tight end Jacob Tamme issued a statement on Twitter after the game praising the pregame show of unity as "what we wanted to show tonight."

Said Ingram earlier this week: "I know people have different opinions about the anthem. But Kaep's cause and what he's doing it for, for the injustices of not just blacks but anybody who [is a victim of] police brutality ... I know it happens to everybody, whites, blacks, Asians. It's just unfortunate.

"So I support [the protestors] and everything they stand for 100 percent. But with my team, I want us to do something that we all would be proud of. It's just unfortunate what's going on in our country right now."

Falcons, Saints stand together before MNF
Before the game on Monday night, the Falcons and Saints meet on the field to stand together as a sign of unity.