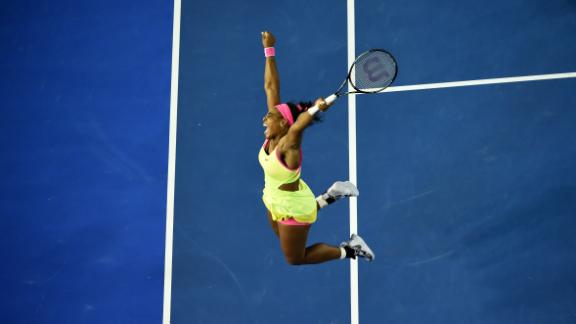 She struggled with a hacking cough, she was sick, and she twice celebrated too early, but she held her composure in a 6-3, 7-6 (5) victory on Saturday.

On her third match point, she let her racket go before hearing a let call to what she thought was an ace.

"I thought, 'Wow this is it, I did it, only to hear let. I was like, 'OK Serena!'" she said. "I was very disappointed, because Maria was playing so well. I thought she's going to try to hit a winner now. She's goes for broke on match point."

So she fell back on her biggest weapon, firing another ace -- her 15th of the set and 18th of the match. This time, after checking it was official, she bounced around like a little child and the celebration was real.

"I'm so honored to be here and to hold this 19th trophy," Williams said. "I didn't think it would happen this fast, to be honest, but it feels really good."

The 33-year-old Williams became the oldest winner of the Australian women's title in the Open era and moved into outright second place on the list of major winners in the Open era, behind only Steffi Graf's 22. Almost immediately, her thoughts turned to the next major.

Still affected by a recent cold, Williams controlled the first set around a rain delay when play was stopped for 13 minutes for the roof on Rod Laver Arena to be closed due. Williams came back on court momentarily, but returned to the locker room.

"I had a really bad cough, I ended up throwing up, actually," Williams said. "I've never done that before. I guess there's a first time for anything. I think in a way that just helped me -- I felt better after that."

She returned to court and fired an ace to start a run of six straight points and, after dropping serve for the only time in the match, broke Sharapova's serve for a third time to clinch it.

Williams won the first six points of the second set, too, before Sharapova started hitting out.

The five-time major winner had 18 of her 21 winners in the second set, and fended off four break points.

No. 2-ranked Sharapova saved two match points, including one in the 10th game when she bravely hit a forehand winner down the line -- applauded by Williams -- and she calmly held serve twice to stay in the match.

Sharapova saved another match point with a winning service return, but Williams took her next chance to secure the title that lifted her above the career records of Chris Evert and Martina Navratilova, who had 18 Grand Slam singles titles.

She was aggressive from the start, pumping her fist and screaming "C'mon" after big points. But she had to tone it down after going slightly too far in the seventh game of the second set when the chair umpire ruled a hindrance when she celebrated too early on a service winner and was docked a point.

When she eventually held that game with an ace, she held out her fist and mouthed "C'mon", barely uttering a sound.

"I know the rules now. I'm not one to argue unless I'm sure that I'm right ... If anything I need to relax more," Williams said. "At that point, I was so uptight."

Williams has won 16 in a row and is 17-2 in career matches against Sharapova, who hasn't won a head-to-head meeting since 2004.

And while Williams has a 100 percent record at Melbourne Park, Sharapova dropped to 1-3 in Australian Open finals -- her only victory coming in 2008.

"I haven't beaten her in a long time but I love every time I step on the court with her," said Sharapova, who saved two match points in the second round before advancing. "I've had some of the best memories of my career on this court and also some of my toughest losses, but that's the life of a tennis player."