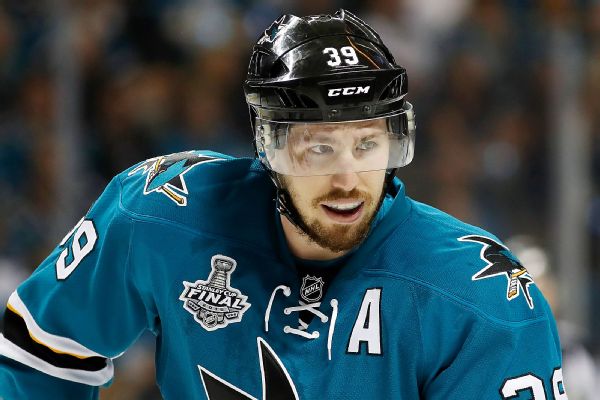 SAN JOSE, Calif. -- San Jose Sharks center Logan Couture played in the postseason despite two fractures in his face, along with the plastic and wiring in his mouth that kept his teeth in place.

Couture revealed more details of the injuries sustained when a deflected slap shot from teammate Brent Burns hit him in the mouth in Nashville on March 25.

He said he had one fracture that went from his upper lip to the nose area that is still very sore and will take about six weeks to completely heal. The other fracture is below his bottom row of teeth.

"They're not fun," he said Tuesday. "It's not extreme pain right now. Obviously it's bearable to get by on a day-to-day basis. It's still a struggle to eat and sleep and some of that stuff. It's not comfortable. It's an uncomfortable state to be in."

Couture said he will meet with his dentist soon to figure out the next steps in recovery. He will need implants to get the teeth fixed and hopes to get that work done in the next few weeks so he can return home to Canada after that.

Couture said he is still "crushed" by San Jose's first-round playoff loss in six games to the Edmonton Oilers and will need a few more days to get his mind right.

After San Jose made a run all the way to the Stanley Cup finals a year ago, Couture said it was frustrating to enter the postseason with the team so banged up this year.

"You sit there and think, 'Why is this happening to us?'" he said. "It's the game of hockey and injuries happen. Teams that win, they battle through the adversity and the injuries and other guys step up and play big roles. Unfortunately, we weren't able to do that as a team."

Couture scored two goals in a Game 4 win but did not play up to his usual standards. The Sharks were also hurt by an injury to top-line center Joe Thornton, who tore the ACL and MCL in his left knee on April 2 and was back playing in Game 3 two weeks later.

Thornton had two assists in the final four games of the series before undergoing surgery to repair the knee on Monday.

"He's incredible," Couture said. "I don't know if he feels pain because it can't be fun. The fact that he skated three days after it happened was shocking. I don't think anyone expected that in our room. It shows how badly he wants to win that he was able to get back out there. The steps that he was going through to play was pretty remarkable. Everyone in our dressing room respects the heck out of that guy. He really wants to win."