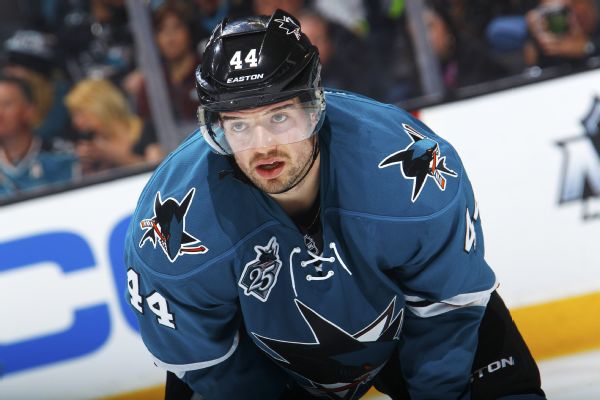 The Sharks signed shutdown defenseman Marc-Edouard Vlasic to a $56 million, eight-year contract and goalie Martin Jones to a $34.5 million, six-year deal. Both players had one year remaining on their contracts and got modified no-trade clauses.

"They were really important," general manager Doug Wilson said. "These are guys who fit for now and the future. They are core pieces for our team at key positons."

The Sharks also have reportedly reached a one-year deal with longtime centerJoe Thornton, and have an offer out to stalwartPatrick Marleauas well.

San Jose has offers out to both players but Wilson wouldn't comment about where negotiations stand.

The defense should be in good shape for years to come thanks to the new deals with Vlasic and Jones and an eight-year extension for Norris Trophy winner Brent Burns last November.

The Sharks also have key forwards Joe Pavelski and Logan Couture under contract for two more seasons and several young players they hope will develop in the next few years.

"That's a good starting point," Vlasic said. "We've been competitive every year since I've been on this team. I don't see us dropping off in the near future and I see us being very competitive many years down the road."

The 30-year-old Vlasic was a second-round pick by San Jose in 2005 and became a constant presence on the blue line the following year. If he finishes this contract with San Jose he will spend 20 seasons with the Sharks.

Vlasic has played 812 games over 11 seasons and is usually tasked with shutting down the opponent's top scorers. He had six goals and 22 assists last season, while blocking 146 shots and playing more than two minutes a game short-handed.

"Marc-Edouard is one of the most respected players in the league, certainly one of the best defenseman," Wilson said. "Not only the best stopper against other teams' top players but he can move pucks. We expect even more offense going forward. We think he's coming into prime of his career."

The 27-year-old Jones has been a rock in goal since being acquired in a trade with Boston two years ago that included a first-round draft pick for a player who had never been a consistent starter in the NHL.

Jones backed up San Jose's belief in him and helped the team reach the Cup Final in 2016 and the playoffs this past season.

"Ultimately he plays big when it matters," Wilson said. "That's always been his history. Obviously we don't get to the Stanley Cup Final two years ago without him. The ultimate compliment for a goalie is that a team loves playing in front of him and trusts him. He has that."

Jones leads the NHL with 130 games started the past two seasons and is tied for second with 72 wins. He has allowed 2.33 goals per game with the Sharks.

"All I have to worry about is focusing on playing hockey right now," he said. "It's important. I didn't have a lot of doubts it wouldn't get done anyway. But it's nice to get it out of the way and just focus on hockey."
Report a correction or typo
Related topics:
sportsespnnhljoe thorntonfree agencyjoe pavelskibrent burnsmarc edouard vlasiclogan couturesan jose sharksmartin jonespatrick marleau
Copyright © 2022 ESPN Internet Ventures. All rights reserved.
TOP STORIES
Where abortion stands nationally: State-by-state breakdown of laws
How does overturning Roe v. Wade affect IVF treatments?
SF Pride Parade and Celebration | Watch live Sunday on ABC7
What does Supreme Court decision on abortion rights mean for CA?
Planned Parenthood responds to SCOTUS decision: 'Do not lose hope'
Rep. Speier: SCOTUS abortion ruling is 'mandating pregnancy'
Brian Laundrie confession letter released: 'I ended her life'
Show More
Biden vows to 'do all in my power' to protect abortion access
What to know: Many fires burning across SF Bay Area right now
How personal data could be used to enforce anti-abortion laws
SF Pride: What to know about events, performers, live stream
ABC7's new 24/7 live stream offers local news, weather
More TOP STORIES News