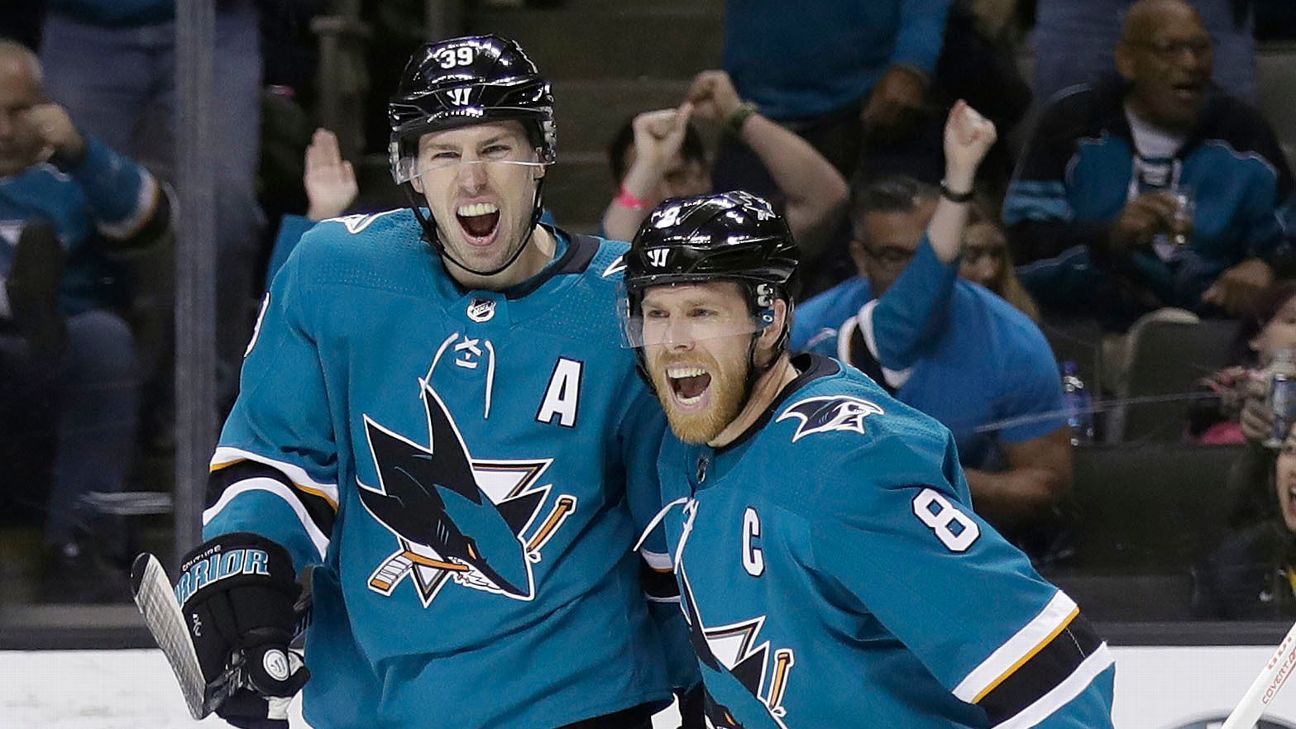 SAN JOSE -- The dressing room stall is empty, save for a few rolls of stick tape. Located to the right of forward Timo Meier, two stalls down from franchise legend Joe Thornton, it used to be where San Jose Sharks captain Joe Pavelski would hang his gear after practice. Another player will take it over this season. But at the start of 2019-20 training camp, it's a shrine to Pavelski, and a visual reminder of the void his departure as a free agent leaves on this team and its players.

Sharks center Logan Couture texted Pavelski as he traveled to their practice facility on Friday, writing: "It's going to be weird going to the rink and not seeing you there."

Couture entered the NHL in 2009-10. Pavelski had been a part of every training camp in which he's participated.

"The s---ty part of professional sports is when friends move on," said Couture, who was named Pavelski's successor as captain this week. "It's not going to be the same [here]."

Pavelski, 35, signed with the Dallas Stars after failing to come to an agreement on money or term with the Sharks. Economically speaking, the move wasn't shocking. His deal carried a cap hit of $7 million annually for three years. San Jose currently has less than $3 million in cap space, after an offseason that saw the Sharks sign defenseman Erik Karlsson (eight years, $92 million) and Meier (four years, $24 million) to significant new deals.

Culturally speaking, this is a new era for the San Jose Sharks: the post-Pavelski era. He arrived in 2006-07 and played 963 games for them, scoring 355 goals. His reputation as a win-at-all-costs player, especially in the postseason, meant he was one of the dressing room's most important leaders. Look no further than last postseason: There was the puck off his mouth early in the first round that cost him teeth; the horrific concussion he suffered when his head bounced off the ice in Game 7 against the Vegas Golden Knights in the second round; the reaggravation of a knee injury on a hit by St. Louisdefenseman Alex Pietrangelo in Game 5 of the Western Conference finals; and hand surgery during the playoffs as well.

Given that history, it was hard to imagine the Sharks without Pavelski. After the Blues eliminated them in the conference final, Pavelski seemed convinced he'd remain with San Jose, too. "I'm pretty confident. I have a pretty strong belief system is that I'll be back here. It's not about dotting the I's yet. But we love it here. I'm sure things will move along," he said.

That they did -- straight to Texas, where Pavelski skated with Stars captain Jamie Benn on Friday.

"This is the 14th training camp I'm going through. I haven't found any secrets in the first 13," joked Pavelski at Stars camp. "It's different. It's fun. I think you come in here and you embrace that there will be different things. You learn to do it their way and try and help add to that how you can."

Pavelski may not have any secrets to offer, but he left a mark in San Jose.

"He was always here, forever," said Sharks forward Tomas Hertl. "Especially for me, all six of my years. It for sure sucks. He was a great friend to me. He helped me a lot, and spent time with him on the ice and off the ice. It's tough."

But the message post-Pavelski is one of opportunity.

"Losing Pavs is a big hole to fill. With the way he played, and how established he was in this room," said Karlsson. "Someone else is going to have to do his job, and that's a workload that'll be shared by a lot of people in this room during the course of the year. We have to adapt to the players we have in this room now, and not look at what we're missing."

For coach Pete DeBoer, the challenge is filling the leadership void left by Pavelski with the core of players the Sharks return this season.

"Pav played a huge role with our team, with our group, but also with me. Naming him captain was one of the first things I did when I was a coach here. Not having him here is different," said DeBoer. "At the same time, that's the NHL. I went to a Stanley Cup Final in New Jersey, and lost Zach Parise and Ilya Kovalchuk over the next 12-18 months. It's unfortunate, but that's how this business goes. But the good news here we have a big core of leadership guys, and guys that have grown up in this organization."

"I think it's going to be great," said Thornton of Couture's captaincy. "I've played a long time with him. I've seen him grow. I've seen him mature. I'm super proud of him."

Couture said he missed a call from the Sharks' former captain on the eve of camp, but that he had been in communication with Pavelski. "I talked to him a bunch through the summer. He was great keeping a few of us in the loop about what his plans were and what was going on in his life," said Couture.