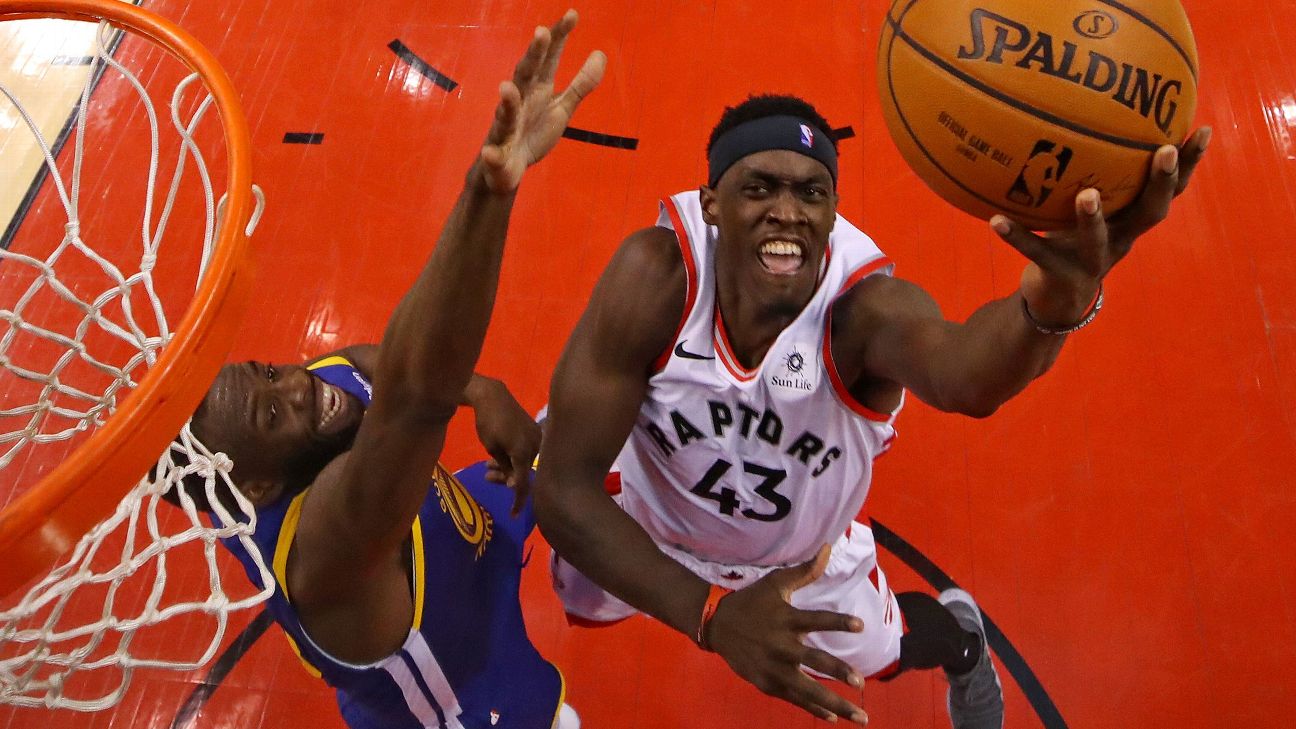 TORONTO -- When the Raptors convened in Vancouver for training camp in September, Pascal Siakam wasn't assured of being the team's starting power forward. Fast-forward eight months, and he was not only starting, but starring for Toronto in the franchise's first NBA Finals game.

Siakam's sensational all-around effort -- he finished with 32 points on 14-for-17 shooting to go along with 8 rebounds, 5 assists, 1 steal and 2 blocks -- powered a balanced Toronto attack that lifted the Raptors to a 118-109 victory over the Golden State Warriors in Game 1 of the NBA Finals at Scotiabank Arena on Thursday night.

"I think obviously getting some easy buckets in transition, something that I haven't really been able to do all playoffs, and I think just being able to run and getting easy baskets at the rim," Siakam said when asked what keyed his Game 1 performance. "And then, from there, just playing, just playing whatever defense gives me. That's why I always say, kind of play off of that and whatever is open, just taking it with confidence and believing in myself."

With Golden State doing everything it could to try to slow down Kawhi Leonard -- he finished with 23 points, 8 rebounds and 5 assists but shot 5-for-14 from the field -- that created room for Siakam to take advantage of the attention directed at Leonard.

That's certainly what he did -- especially in the third quarter. Siakam didn't miss a shot in the period, going 6-for-6 from the field and 2-for-2 from the free throw line to score 14 points, matching a 13-point quarter from Stephen Curry as Toronto parried away the Warriors' typical third-quarter surge and prevented them from reclaiming control of the proceedings.

"I think he played an amazing game, obviously, but he got out in transition and our transition D was horrible, and I let him get in a rhythm in the first half, first quarter, really," Warriors forwardDraymond Green said.

"So I got to do a better job of taking his rhythm away, and I will, but he had a great game. But that's on me."

Siakam's success in that quarter, as well as throughout the game, saw him return to what had made him a breakout star this season and the likely winner of the league's Most Improved Player Award: his aggression and creativity at both ends.

"The way they played him tonight, they were helping off of him and he was just able to get to his spots and get to his spaces cutting behind them, and made some 3s," Raptors guardKyle Lowry told ESPN. "One thing about [Siakam] is he's going to keep playing and keep working no matter what.

"He's just going to keep working. He's had a couple games where he didn't play as well againstGiannis [Antetokounmpoin the Eastern Conference finals], but tonight he played well."

Siakam did struggle at times against both the Philadelphia 76ers in the Eastern Conference semifinals and theMilwaukee Bucksbecause of the massive length of Sixers center Joel Embiid and Bucks center Brook Lopez (plus Antetokounmpo).

Golden State, for all of the brilliance Green brings to the court defensively, lacks that same kind of intimidating defensive presence. And Siakam looked like a new man with the freedom to attack, knowing he wasn't in danger of getting his shot blocked or altered.

And, as a result, the Raptors looked like a team more than capable of winning three more games in this series, and winning the team's first NBA title.

"I thought his composure was great," Raptors coach Nick Nurse told ESPN. "He'd get to a spot and he'd wait and get on balance, he'd upfake, he'd turn, get the angle and move it to where he needed to move it.

That phrase -- doing a little bit of everything -- has been what has made Siakam such an integral part of what Toronto has tried to do all season. He has become a jack-of-all-trades at both ends -- shooting, driving and passing offensively, and taking on whatever assignment is necessary defensively -- essentially serving as Nurse's Swiss Army knife at either end of the court.

While he was a nice piece off the bench for the Raptors last season, that he would become this good this soon wasn't something anyone could've predicted when this season began. But ever since that training camp in Vancouver, Nurse has encouraged Siakam to be himself on the court -- to play through mistakes, to try things, to play with confidence at all times.

"It definitely helps a lot," Siakam told ESPN of the freedom with which Nurse has allowed him to play. "When you get minutes and you have the trust of the coaches and guys just letting you play your game and be yourself, it definitely helps." 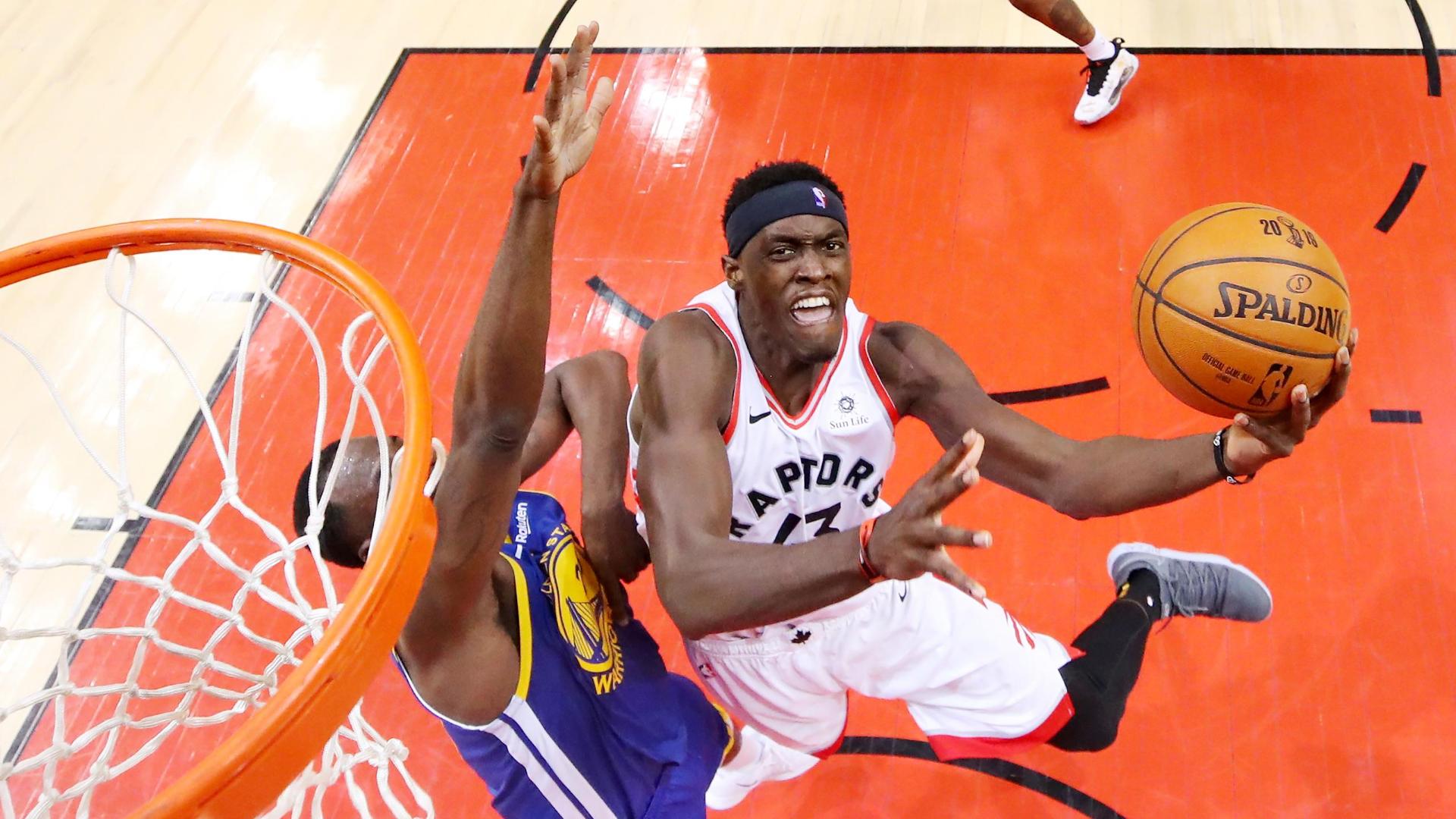 How Siakam became the Raptors' unlikely Game 1 hero
Pascal Siakam erupted for 32 points in his first career Finals game, but he did not always dream about playing in the NBA growing up in Cameroon. 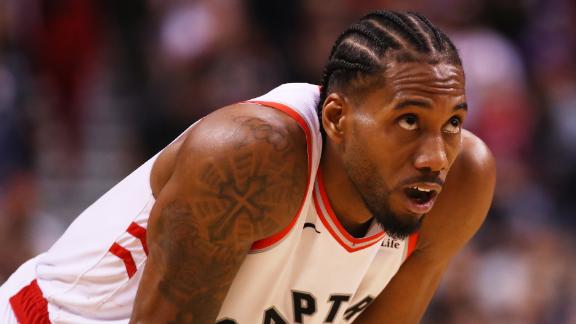 Leonard, Siakam lead Raptors to Game 1 win
Kawhi Leonard and Pascal Siakam combine for 55 points as the Raptors beat the Warriors 118-109 in Game 1 of the NBA Finals. 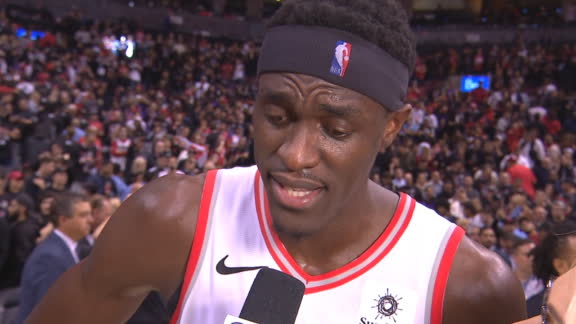