Some on Giants fear JPP may miss season due to hand, sources say 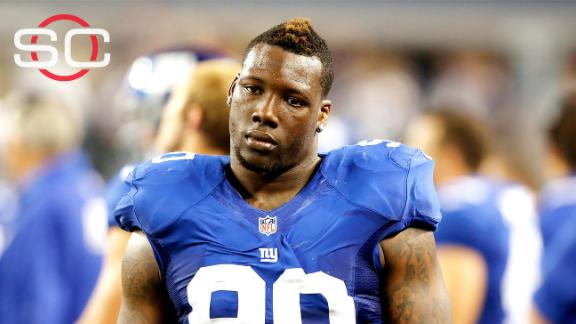 The New York Giants feel the damage to Jason Pierre-Paul's right hand is worse than they were led to believe, sources said, and after the team got a chance to examine him on Monday, there are people in the organization who fear he might not be able to return to the field at all this year.

One source said that, in addition to the missing right index finger, fractured thumb and skin grafts -- injuries suffered in a July 4 fireworks accident -- a portion of one of the other fingers on Pierre-Paul's right hand is missing.

The Giants have no plans at this time to rescind Pierre-Paul's franchise tender, mainly because it doesn't cost them anything. Until he signs it, they don't have to pay him. And if he were to sign it, they could place him on the non-football injury list, which at this point would end his season. If he is on the NFI list, the team can elect not to pay him, and the likelihood of Pierre-Paul winning a grievance would be low because he admitted to a having non-football injury.

Not everyone in the Giants organization has given up on the idea of Pierre-Paul returning. And some who saw him in the building Monday were encouraged by his attitude, his demeanor and his physical condition apart from the hand. But the prevailing sentiment around the Giants is one of frustration over the unknown. There is simply no way for them to know when Pierre-Paul will be ready to play, or how good he will be once ready.

Pierre-Paul continues to work out on his own, rehabbing and training with his own doctors, trainers and coaches near his home in South Florida. When he was in East Rutherford, New Jersey, this past week, Pierre-Paul offered to play if the team could outfit him with a protective device for his hand. But given the cost of paying Pierre-Paul on the franchise tag (about $871,000 per game), the Giants didn't want to put him on the field at less than 100 percent.

Giants fear Pierre-Paul may miss season
Adam Schefter discusses the questions surrounding DE Jason Pierre-Paul's return and the fear within the Giants' organization that Pierre-Paul may not be able to play at all this year.