Source: Jason Pierre-Paul to take physical with Giants on Monday 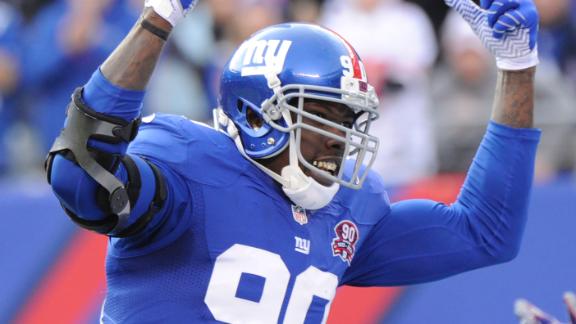 Jason Pierre-Paulreturned to the New York Giants on Monday to meet with the team and take a physical, a source confirmed to ESPN's Josina Anderson.

The NFL Network reported earlier Monday that Pierre-Paul planned to travel to the Giants' facility for his physical.

Pierre-Paul has stayed away from the Giants for the entire offseason, during which time he and the team have been in a dispute over his contract status. The two-time Pro Bowler was also involved in aJuly 4 fireworks accident that cost him his right index finger and further complicated his status.

A source told ESPN last week that Pierre-Paul would meet with Giants medical personnel in East Rutherford, New Jersey, before the defensive end and the team determine when he might be able to play.

The Giants open the regular season Sunday night in Dallas against the Cowboys.

Giants head coach Tom Coughlin said he had not seen Pierre-Paul as of early Monday afternoon. Coughlin stated that the Giants have to see the state of Pierre-Paul's health before assessing anything else.

But when asked if it is fair to say that Pierre-Paul won't play in the opener against Dallas, Coughlin refused to rule him out no matter how unlikely the scenario.

"I'm not saying anything," Coughlin said. "Maybe he comes in and he's in great shape and the doctors clear him right away and he practices two days and goes and plays. I don't know. I am not sure about any of that. But I am not going to rule that out either."

Cornerback Prince Amukamara said Pierre-Paul will be a major upgrade for the Giants' defense.

"If JPP came to our team, we would instantly become a way better defense just because he is a big part of our defense," Amukamara said. "But he's not here now -- [we] can't really depend on somebody who is not here.

"[That's] definitely not a shot at JPP, but I am just worried about who we have in this locker room and who we have on the field. If he definitely comes today, we would instantly become a better defense."

Pierre-Paul, who has been seeking a long-term contract, has yet to sign his $14.813 million franchise tender and won't sign it until he is sure the Giants won't place him on the non-football injury list.

If the Giants put Pierre-Paul on the NFI list, they could elect not to pay him for games missed. The NFI list requires a player to miss at least six games.

Pierre-Paul believes he can return to the field earlier than that, so before he signs the tender, he would like to speak to the Giants about guaranteeing the prorated portion of his salary that reflects the number of games he and they expect him to be able to play.

Pierre-Paul had his right index finger amputated in July and underwent surgery to repair fractures in his right thumb following the fireworks accident. The five-year veteran is prohibited from signing a long-term contract until after the 2015 season concludes.

Information from ESPN Giants reporter Dan Graziano and ESPNNewYork.com's Ohm Youngmisuk was used in this report.