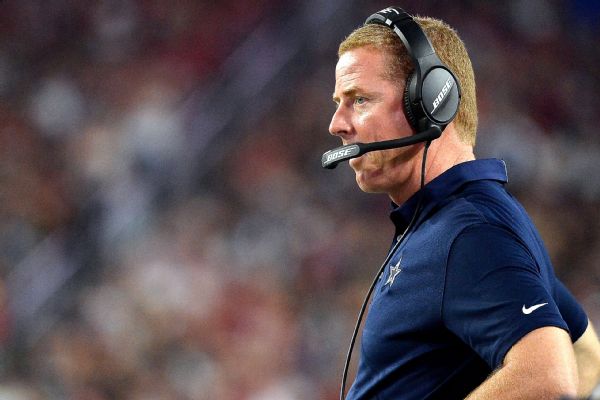 FRISCO, Texas - The change Jerry Jones and Jason Garrett have alluded to since the Dallas Cowboys' season ended has started.

According to multiple sources, special teams coordinator Rich Bisaccia will be allowed to leave despite being under contract with the Cowboys for two more seasons, most likely to join Jon Gruden with the Oakland Raiders, while quarterbacks coach Wade Wilson and secondary coach Joe Baker, whose contracts were set to expire, were told they will not be back with the team.

The future of offensive line coach Frank Pollack is also in question, despite having three Pro Bowlers in Tyron Smith, Travis Frederick and Zack Martin in place since 2014. Pollack took over as line coach in 2015. The Cowboys have finished ninth, second and second in the NFL in rushing. However, the pass protection was an issue in 2017, especially with Smith missing three full games and most of four because of injuries. The Cowboys allowed 22 of 32 sacks in the final eight games, including eight against Atlanta without Smith. Dak Prescott threw just one touchdown pass in the games in which Smith did not play.

Bisaccia had been the Cowboys assistant head coach and special teams coordinator since 2013. While the return games had not produced much, the Cowboys' coverage teams have been among the best in the NFL. The Cowboys allowed just 75 punt return yards, the fewest in the league. Before a late-season slide, Dan Bailey had been the most accurate kicker in NFL history, while punter Chris Jones had his best season.

The Cowboys had made a commitment to adding or keeping key special teams' contributors over the years.

Wilson, who turns 59 next month, had been the quarterbacks coach since 2007. He helped the development of Tony Romo and Prescott, who earned Pro Bowl honors, but the Cowboys drafted just two quarterbacks since Wilson had been on the staff: Stephen McGee in 2009 and Prescott in 2016. Both were fourth round picks.

Baker, a college teammate of Garrett's, was promoted to secondary coach in 2016 after spending four seasons as an assistant secondary or safeties coach. The Cowboys have not had a secondary member lead the team with more than three interceptions since Terence Newman had four in 2011. The Cowboys selected four defensive backs in last year's draft in Chidobe Awuzie, Jourdan Lewis, Xavier Woods and Marquez White after they opted to let veterans Brandon Carr, Barry Church, Morris Claiborne and J.J. Wilcox leave in free agency.