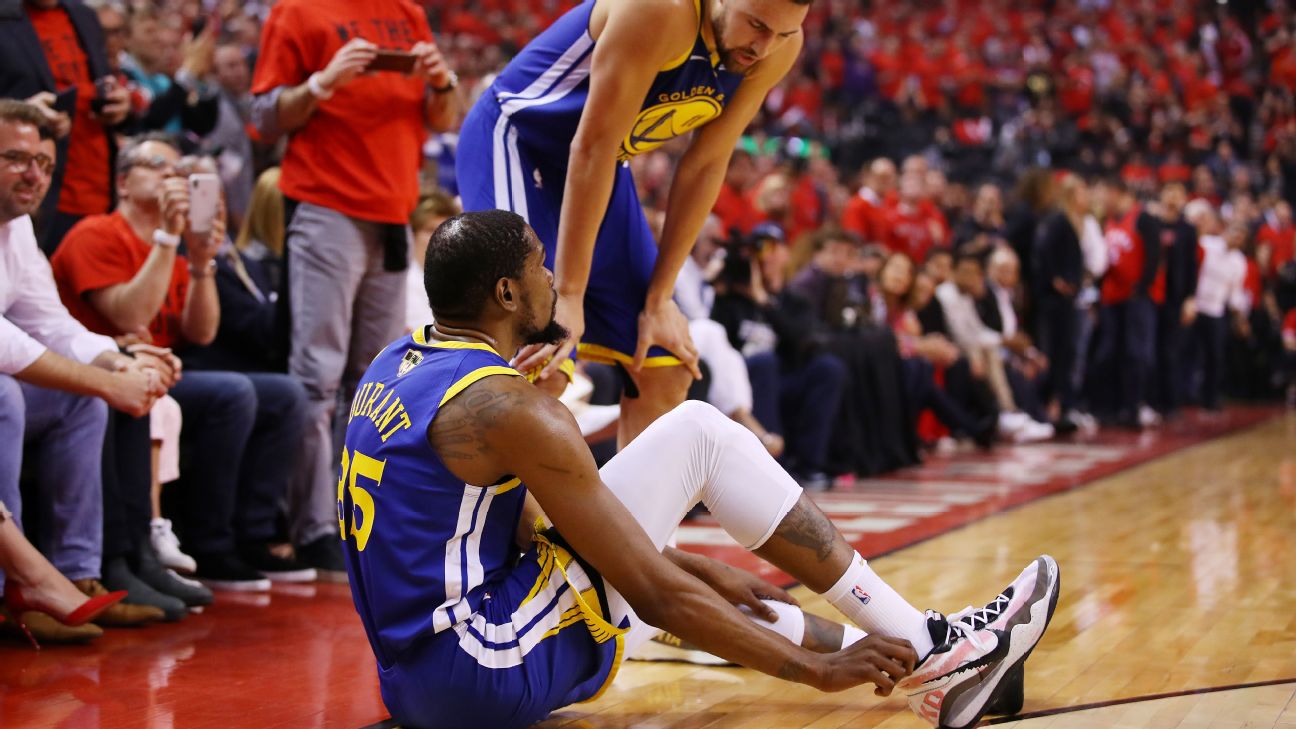 Warriors star forward Kevin Durantflew to New York City on Tuesday and was set to undergo an MRI on his injured Achilles, sources told ESPN.

League sources previously told ESPN's Ramona Shelburne and Adrian Wojnarowski that the team believes the MRI will confirm an Achilles tear that Durant suffered in Golden State's106-105 win over the Toronto Raptors in Game 5 of the NBA Finals on Monday.

The Warriors, who returned back to Oakland, California, on Tuesday, are expected to announce the results of the MRI either Tuesday night or Wednesday.

Golden State general manager Bob Myers had said after Monday's game that Durant would have an MRI on Tuesday to determine the severity of the injury, but the emotional looks on the players' and coaches' faces told more of the story.

"It's an Achilles injury," Myers said after the game while holding back tears. "I don't know the extent of it. He'll have an MRI tomorrow. Prior to coming back, he went through four weeks with a medical team, and it was thorough, and it was experts and multiple MRIs and multiple doctors, and we felt good about the process."

Prior to Monday's injury, Durant hadn't played since injuring his right calf on May 8 against the Houston Rockets in the Western Conference semifinals. He was initially ruled a game-time decision after going through Sunday's practice and Monday's shootaround, but Warriors coach Steve Kerr said before the game that Durant would play without any restrictions.

It was a decision Myers passionately defended after the game.

"He was cleared to play tonight," Myers said. "That was a collaborative decision. I don't believe there's anybody to blame. ... If you have to, you can blame me. I run our basketball operations department. And to tell you something about Kevin Durant: Kevin Durant loves to play basketball, and the people that questioned whether he wanted to get back to this team were wrong.

"He's one of the most misunderstood people. He's a good teammate, he's a good person. It's not fair. I'm lucky to know him. I don't know -- I don't have all the information on what really the extent of what it all means until we get an MRI, but the people that worked with him and cleared him are good people. They're good people."

Durant left Scotiabank Arena in the third quarter, using crutches and wearing a walking boot on his right leg. He was accompanied by Myers and Rick Celebrini, the Warriors' director of sports medicine and performance. Durant later took to Instagram after the game.

"I'm hurting deep in the soul right now I can't lie," Durant wrote in the post. "But seeing my brothers get this win was like taking a shot of tequila, I got new life lol."

Durant finished the playoffs averaging 32.3 points on 51 percent shooting, including 44 percent in 3-point shooting, and 90 percent from the free throw line. He's the first player in NBA history to average 30 points on shooting percentages of at least 50-40-90 in a single postseason with at least five games played. Durant's postseason scoring average was also the fourth-best in a single postseason in Warriors history. Only Wilt Chamberlain and Rick Barry had higher averages with at least 10 games played.

The play on which Durant was hurt happened with 9 minutes, 51 seconds left in the second quarter as he tried to drive by Raptors big man Serge Ibaka. Durant was just above the 3-point line on the right side, dribbled between his legs and went to drive with his left hand. Then his leg appeared to give, causing him to lose the ball.

Durant went down in pain after taking a couple of steps, grabbing the lower part of his calf on the sideline. Durant remained on the floor for a few moments as the Raptors came down the floor and made a basket. The Warriors called timeout as Celebrini raced to the floor to check on Durant. During that moment, some Raptors fans cheered the fact that Durant was on the floor, upsetting Warriors players.

"Trash," Warriors big man DeMarcus Cousins said of the initial reaction. "So trash. But like I said, when we're behind the lines, it's superstar athletes. Not human beings. It's always about what we do between those lines. That's it. That's all that ever matters. And then once we lash out and do human-type things, then we're considered bad guys."

Durant was then escorted straight to the locker room for further evaluation. As he made his way off the floor, both Warriors and Raptors players offered him well wishes as the crowd chanted, "KD! KD!" with some encouragement from several Raptors players. Warriors teammate Andre Iguodala was by Durant's side with Celebrini as Durant was helped off the floor. Warriors guard Stephen Curry followed Durant into the locker room, as well.

"Sometimes the spirit tells you what to do," Curry explained. "You don't really make decisions, you just act on it. I can't tell you what went through my head. It just felt right."

Prior to the injury, Durant provided the Warriors with exactly the kind of scoring boost they were hoping for. He scored 11 points in 12 minutes -- which is notable given that Durant played 12 of the game's first 14 minutes despite the fact that Kerr said before the game that Durant would play in "short bursts."

Kerr acknowledged after Monday's shootaround that the uncertainty surrounding Durant's status has been a tedious process for all involved.

Durant was expected to be among the marquee free agents this summer. He might now end up exercising his $31.5 million option to stay with the Warriors, especially if he's going to be sidelined for an extended period. 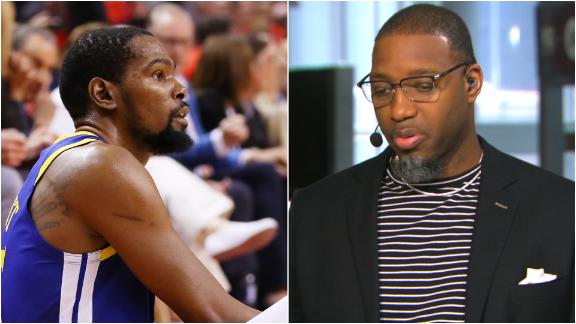 McGrady: KD knew the consequences in playing Game 5
Tracy McGrady doesn't think it was a mistake for Kevin Durant to play in Game 5 because he had been vetted by doctors and knew there was potential he could further injure himself. 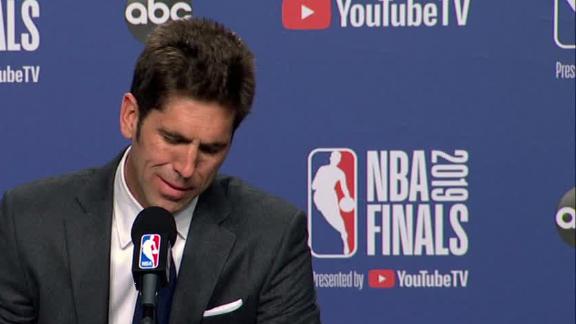