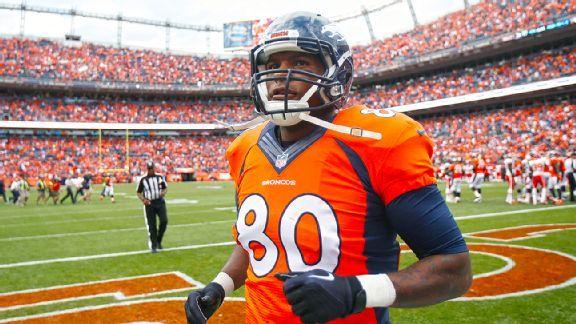 ESPN
By Michael DiRocco
JACKSONVILLE, Fla. -- The Jaguars have reached an agreement with free-agent tight end Julius Thomas, and he is expected to sign a contract with the team Tuesday, according to league sources.

The Denver Post, which first reported the news Monday night, said the multiyear contract is worth around $9 million a season.

A source told ESPN's Chris Mortensen that Thomas continues to talk with one other team but that the money the Jaguars are offering might be too much for another team to overcome.

In another deal, the Jaguars are set to sign linebacker Dan Skuta to a five-year contract Tuesday, a league source told ESPN NFL Insider Adam Caplan.

Once the contract is signed, it is expected to be worth $20.5 million with $8 million guaranteed, the source said.

Thomas, 26, was a fourth-round pick by the Broncos in the 2011 draft, John Elway's first as the team's top football executive. Elway made the pick after Thomas had played just one year of college football at Portland State after finishing his eligibility on the school's basketball team.

His first two years were largely lost to an ankle injury he suffered on his first NFL catch -- against the Cincinnati Bengals in the 2011 season -- as Thomas also had surgery on the ankle in the months leading up to the 2012 season.

As a result, when he was set to enter his third year in the league, his career stats were nine games played, one catch for 5 yards and zero touchdowns in two seasons.

When the Broncos' offense broke out to set the league's single-season scoring record in 2013 (606 points), Thomas broke out as well with 65 catches for 788 yards and 12 touchdowns as he earned his first Pro Bowl trip. The 2014 season looked like it would be more of the same when Thomas led the league in touchdown receptions -- 12 -- after nine games.

But he suffered a left ankle injury in the first quarter of the Broncos' Nov. 16 loss in St. Louis -- the opposite ankle from his rookie-year injury -- which largely derailed his season. He missed two games, was in uniform for a third but did not play and caught just three passes over the final six weeks of the regular season.

He also did not have a touchdown catch over the final seven regular-season games or in the Broncos' playoff loss to the Indianapolis Colts.

Thomas presents a difficult matchup in the passing game for defenses, especially lined up out wide or in the slot. His representatives made it clear to the Broncos that they wanted Thomas to be among the highest-paid players at the position.

The Broncos weren't prepared to go that high because of his injury history and because, under the new coaching staff, the team's tight ends have to be far more functional blockers in the run game than Thomas has shown himself to be.

Skuta had 35 tackles, five sacks and three forced fumbles with San Francisco last season. He started nine games at outside linebacker in place of the suspended Aldon Smith.

The 28-year-old Skuta likely will line up at what the Jaguars call the otto, which is essentially a strongside linebacker with the ability to rush and drop in coverage. Skuta also has played inside linebacker in his career.