Sources: Spurs think Tim Duncan will be back for a 19th NBA season 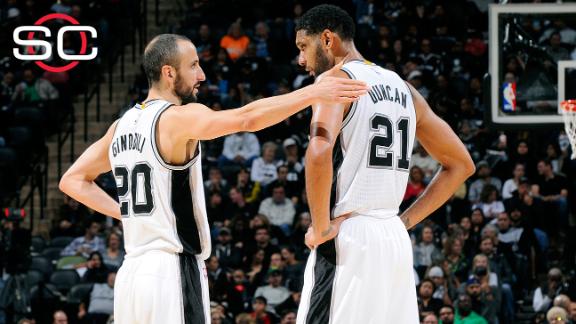 The San Antonio Spurs are operating under the premise that Tim Duncan will return in 2015-16 for a 19th NBA season, according to league sources.

Although Duncan and fellow Spurs mainstay Manu Ginobili have yet to make formal declarations about their plans for next season, sources said that the Spurs are optimistic about re-signing both at salaries that will allow the team to re-sign prized restricted free agent Kawhi Leonard this summer and to pursue top-tier free agent LaMarcus Aldridge.

As ESPN.com reported last month and again this week, San Antonio sits atop Aldridge's list of preferred destinations if, as widely expected, he chooses to leave the Portland Trail Blazers this summer. A source told ESPN The Magazine's Chris Broussard earlier this week that Aldridge is "99.9 percent gone" from the Blazers. ESPN.com also reported this week that the Los Angeles Lakers have moved past the Dallas Mavericks in terms of potential landing spots for Aldridge, who played his high school ball in Dallas before starring collegiately closer to San Antonio at the University of Texas in Austin.

It has been widely assumed in league circles that the Spurs would be forced to try to trade veteran forward Tiago Splitter to help create the needed salary-cap flexibility to handle the max deals San Antonio has earmarked for Leonard (and the likes of Aldridge or Memphis' Marc Gasol) and still have room to accommodate Duncan and Ginobili at reduced salaries, if the latter two choose to play on. But sources told ESPN.com that the Spurs actually rebuffed trade interest from teams hoping to pry Splitter away in conjunction with Thursday's NBA draft, raising the possibility that Splitter might stick around.

The futures are less clear for Spurs sharpshooters Danny Green and Marco Belinelli, two unrestricted free agents who played pivotal roles off the bench in helping San Antonio make back-to-back trips to the NBA Finals in 2013 and 2014 -- and win it all in '14 in a second consecutive Finals showdown with the Miami Heat.

Spurs guard Tony Parker recently told the San Antonio Express-News that he won't pressure Duncan or Ginobili into continuing their careers, but he said he does "think they're both going to play one more year."

"I've talked to them and told them what I think," Parker told the newspaper. "Now it's their decision. It's a very personal decision."

Spurs think they can re-sign Duncan, Ginobili
Michael C. Wright discusses how the San Antonio Spurs will be positioned for free agency if Tim Duncan and Manu Ginobili re-sign.