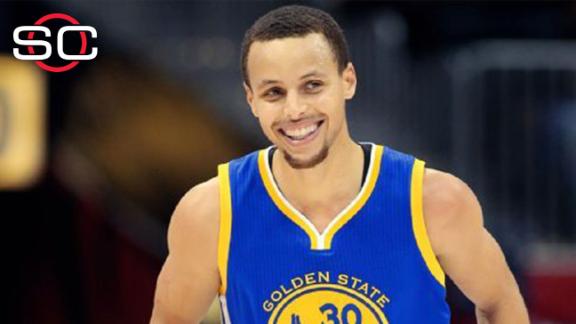 Sources told ESPN.com that Curry will be officially recognized as the league's MVP as early as Monday and is likely to receive the trophy in a ceremony before Game 2 of the Western Conference semifinals against the Memphis Grizzlieson Tuesday.

Curry and Houston's James Harden have been widely regarded as the two favorites for the award, ahead of pursuers such as Cleveland's LeBron James, Oklahoma City's Russell Westbrook, New Orleans' Anthony Davis and the Los Angeles Clippers' Chris Paul.

The Thunder's Kevin Durant, who won his first MVP award in 2013-14, was limited to 27 games this season because of injuries.

When asked about the prospect of winning the MVP trophy after Sunday's Game 1 win over the Grizzlies, Curry said: "I honestly have no idea. It's obviously just ... in the middle of a playoff series, it's hard to kind of separate yourself with other things that may or may not happen.

"Obviously I know what the situation is, and just trying to focus on the game. And if I get a call tomorrow, I'll definitely be happy, and there will be a lot of people that can be proud of that moment, as well, and we'll enjoy it. But right now I'm happy we won Game 1. I'll wake up tomorrow a fresh new day, and we'll see what happens."

Curry carried the top-seeded Warriors to a club-record 67 wins, surpassed his own record for 3-pointers in a season with 286 and added to his growing reputation as one of the most entertaining spectacles in sports.

He'll be the team's first MVP since Wilt Chamberlain in 1960, when the Warriors played in Philadelphia.

This season, Curry eclipsed his own record of 272 3-pointers set two years ago, hitting 286 from beyond the arc. He already owns three of the five most prolific 3-point shooting seasons in NBA history.

Stephen Curry to be named MVP
Marc Stein breaks down the news that Stephen Curry will be named the 2014-15 NBA Most Valuable Player.