Spurs sticking to the game plan 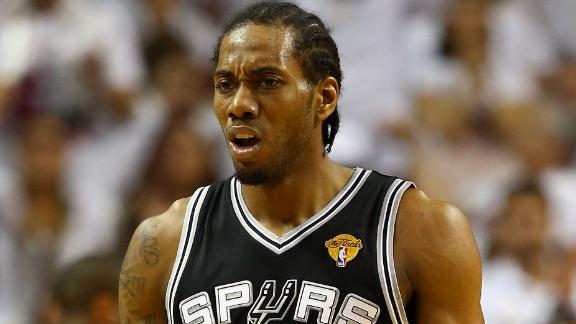 SAN ANTONIO -- Gregg Popovich has a "live in the moment" philosophy.

It has worked well for the defending NBA champion San Antonio Spurs.

"Just to be clear, we've never had any goals whatsoever in the sense of winning 'X' number of games or this year is our year to win a championship," Popovich said Friday at the team's media day.

"All we've said is that we want to be the best team we can be at playoff time and that starts with the very first practice and it's a building block sort of thing."

The Spurs definitely improved as last season progressed, capped by a 14.5-point margin of victory against the Heat in the NBA Finals.

"I'm sure Pop can put together film of what went wrong, that's the way he works," said Tim Duncan, who is entering his 18th season. "We still start with watching film even in the wins. We celebrate our wins, too. I have no idea if [Popovich] will start us off down that road or we'll just go from square one and try to put that behind us like we put last year behind us."

San Antonio returns its entire postseason roster with the re-signing of Aron Baynes on Friday as the team attempts to win consecutive titles for the first time in franchise history.

The Spurs added former UCLA forward Kyle Anderson through the draft and will be without Patty Mills for up to seven months after the reserve point guard had surgery in July to repair a torn rotator cuff.

Veteran Manu Ginobili was cleared to play after being diagnosed with a slight stress fracture in his right fibula during the offseason, but his playing time will be limited initially as he works on his conditioning. Ginobili said he no longer suffers leg pain, though his feelings were hurt after San Antonio prevented him from playing for his native Argentina in the FIBA Basketball World Cup because of the injury.

"We had a talk, I think it was necessary," Ginobili said. "I was hurt [by the decision], probably I am still hurt. Of course, I understand why they did it, I just didn't like it and I disagree with it."

But those feelings faded once Ginobili returned to San Antonio and practiced with so many familiar faces.

"[It helps with] just the same chemistry," Finals MVP Kawhi Leonard said. "There's no one new. We all know the offense, we all know how we all won the championship last year. We've just got to repeat that but play a little harder because the target is on our back now."

The target will be even bigger on Leonard, who at 22 became the third-youngest player to earn Finals MVP. He averaged 17.8 points, 6.4 rebounds, 2.0 assists, 1.6 steals and 1.2 blocks while being San Antonio's top defender against Miami.

"He's made huge strides every year, but I'm probably going to talk to him more about consistency," Popovich said. "He's reached a certain level. If you look at those last three games he played, they were pretty special, but to be in that top echelon of players in our league, it's a huge responsibility to come and do that every night. ... In his case, he's very special because he can bring it on both ends of the court."

The only place the Spurs experienced major changes is on the bench. Assistant coach Sean Markswas promoted to assistant general manager and the team added WNBA All-Star Becky Hammon and four-time Euroleague champion Ettore Messina. Hammon is the first female to serve as a full-time assistant coach in the NBA.

Popovich was impressed with Hammon's knowledge while she interned with the team last season and he has long held Messina in high regard. Messina, who was Ginobili's first coach in Bologna, is already leaving an imprint with San Antonio.

"He already has with our preparation for this season," Popovich said. "He seen we do this, we do that and he'll say, 'Have you thought about this?' I already like some of the suggestions he's made that we'll change."