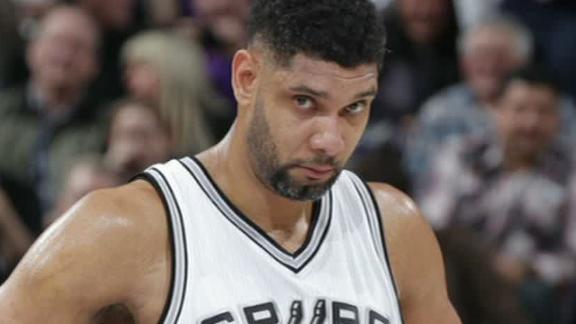 The defending champion San Antonio Spurs are once again on track to make the playoffs, but being in seventh place in the Western Conference is unfamiliar territory for a Tim Duncan-led Spurs squad.

"We had a rough patch but that's kind of how it goes," Duncan said Tuesday. "It can domino sometimes. You lose a close one and then it goes from just losing a close one to feeling bad about it to lose another one. It kind of dominoes. We went through that. We learned from that. Hopefully, we're better because of it."

The Spurs hold a 3-game lead over the eighth-place Oklahoma City Thunder, but at 36-23 already have three more losses this season than they had all of last season. They also went just 4-5 (including four straight losses) on their annual rodeo road trip -- a stretch that usually solidifies the Spurs ahead of their typical postseason push.

"When you lose games, three or four in a row like we have, people start to panic and want to change something or change everything," Duncan said. "You have to stay steady with it and understand it's a work in progress and we're not in as bad a position as it may seem at the time. We get some wins together and start feeling good about ourselves then we'll be in the right place during the playoffs."

San Antonio's relative woes this season can be tied to a rash of injuries that caused starters Tony Parker and Kawhi Leonard to miss extended time.

Leonard missed a 15-game stretch this season with a hand injury and has sat out 18 total, while Parker has missed 14 games this season.

Parker has played in all but one of the Spurs' games since the calendar turned to 2015, but said he is still not 100 percent after suffering a hamstring injury.

"I have not been the same since I came back, and [the hamstring is] still bothering me," Parker told Yahoo! Sports. "Everybody knows. I am not going to use that as an excuse. I am just going to work it out until it gets better."

Parker is averaging a career-low 28.7 minutes per game and his averages of 13.8 points and 4.8 assists per night rival the career lows of his rookie season.

"I've been through a lot of tough challenges in my career," Parker told Yahoo! Sports. "Right now, this is up there."

The Spurs open a six-game homestand Wednesday night with the Sacramento Kings.