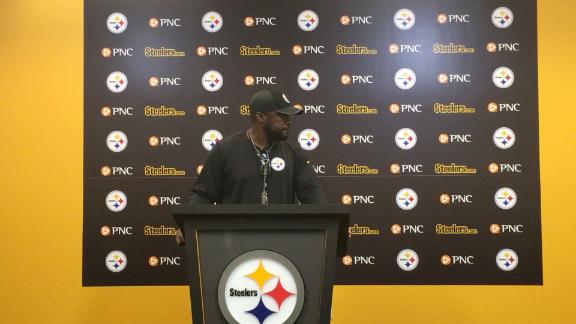 ESPN
By Jeremy Fowler and Nick Wagoner
The San Francisco 49ers have traded tight end Vance McDonaldand a fifth-round pick in next year's draft to the Pittsburgh Steelersin exchange for a fourth-round pick, the teams announced Tuesday.

McDonald, who signed a three-year, $19.7 million contract extension with the Niners in December,had career highs in receiving yards (391), yards per reception (16.29) and touchdowns (four) in 11 games last season before suffering a shoulder injury.

The acquisition reinforces the Steelers' need for playmaking at tight end since Heath Miller retired in 2016. Last year's experiment with Ladarius Green didn't pan out. Jesse James and Xavier Grimble, despite showing flashes, were inconsistent catching passes in training camp.

Ben Roethlisberger likes to target tight ends in scoring range, particularly on back-shoulder throws in the back of the end zone. McDonald, with seven touchdown catches since 2015, should be able to help.

Coach Mike Tomlin, who recalls liking McDonald's skill set coming out of Rice in 2013, has made clear his tight end crop needed an infusion of competition.

"The guys hadn't been consistently varsity enough for our comfort," Tomlin said of his rotation through the first three weeks of preseason games. "It's as black and white as that. They've had some moments positively and had some moments negatively. We were in the market for a guy who was NFL capable. McDonald is that.

"We're not going to anoint him in any way. We're going to put him in uniform like the rest of them and continue to allow them to sort themselves out. It's reasonable to expect the guys that are here to respond positively in the right way to his presence and elevate their play."

The Steelers have carried three or four tight ends in past years, so it's possible James, Grimble and veteran blocker David Johnson will battle for two spots.

On the business side, McDonald's contract won't handcuff the Steelers, who will take a $4.162 million cap hit in 2017 but can escape the contract next year if willing to accept $4.2 million in dead money.

The Steelers haven't had much success with recent trades and hope this one plays out differently. The Steelers gave up late-round picks to acquire a pair of cornerbacks, Brandon Boykin in 2015 and Justin Gilbert in 2016. Neither player became a long-term factor for the defense.

The Niners first began shopping McDonaldduring draft weekend, something coach Kyle Shanahan and general manager John Lynch acknowledged at the time. Unable to find a trade partner, the 49ers held on to McDonald, and he spent most of training camp working with the starting offense.

But the Niners have been particularly pleased with rookie George Kittle, whom they drafted in the fifth round this year. Kittle's ability to block and run routes has him poised for a big role and made McDonald expendable.

In trading McDonald, the 49ers will have to shoulder the leftover weight of a lucrative contract extension he signed with the team late last season under former general manager Trent Baalke. The Niners must absorb the remaining portion of McDonald's $7 million signing bonus on this year's salary cap, which isn't a problem because they've got the most cap space in the league.

A second-round pick in 2013, McDonald had issues with injuries and drops during his tenure with the 49ers. He missed 16 games over four seasons, and his 15.8 drop percentage was worst among tight ends with at least 75 catchable targets since 2013, according to Pro Football Focus.

McDonald had 64 catches for 866 yards and seven touchdowns in his four years with the team.

"We would like to thank Vance for his contributions to this organization on the field and in the community over the last four seasons," Lynch said in a statement. "Although I have only known Vance for a short time, I quickly learned that he and his wife, Kendi, have been tremendous representatives for the team in the community and their service to others is quite commendable. We wish the McDonald family all the best as they move on to a new opportunity in Pittsburgh."

With McDonald on the way out, the Niners now figure to keep Kittle along with veterans Logan Paulsen and Garrett Celek, though Blake Bell and rookie Cole Hikutini also remain in the mix.