Steph Curry hoping to prove Steve Kerr wrong, get back 'as soon as possible' 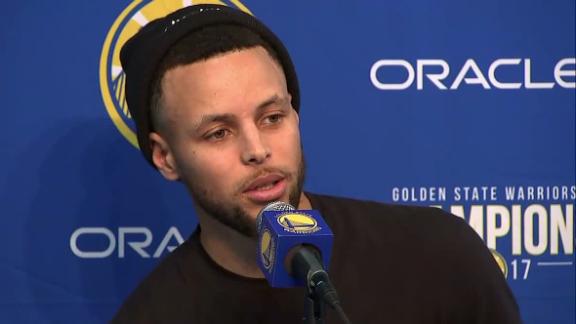 OAKLAND, Calif. -- Contrary to what Golden State Warriors head coach Steve Kerr said aboutStephen Curry's return timetable on Sunday, the two-time MVP is not ruling himself out of playing in the first round of the playoffs.

"Hopefully, I prove what coach said was wrong and put myself in position to get back as soon as possible," Curry said, indicating he could return in the opening round from suffering a Grade 2 MCL sprain. "But right now, who knows? Just try to do my job in the rehab process and get back as soon as I can."

Kerr took the podium before his All-Star point guard prior to a 110-91 home loss to the Utah Jazz.

"There's no way he's playing in the first round," Kerr said during his pregame media availability. "There's no way. I mean, he'll be re-evaluated in three weeks. So, yeah, we have to be ready to play without him and see how he's coming along."

Curry's re-evaluation date is April 14, three days after the season finale at Utah.

"Based on what I've been told, three weeks is a good benchmark to re-evaluate and reassess where I'm at in my progress," Curry said. "Mentally, for me, [I'm just] staying positive and staying upbeat."

The 6-foot-3 guard says he will not travel with the team for the final five road games, but he will rejoin them when postseason play begins.

In the third quarter of the game on Friday against the Atlanta Hawks, his first since missing the previous six with a right ankle tweak, teammate JaVale McGee elevated for a block attempt and ended up falling on the left leg of Curry.

The sharpshooter immediately began hopping and then limping in pain. He then struggled mightily walking to the locker room, where he would remain the rest of the contest.

"It's frustrating, for sure," he said. "I've been [champing] at the bit the last two weeks, ready to get back out there and finish out the regular season strong."

Kerr said the organization isn't in a crisis as it pertains to Curry's extended time off, considering they've been down this road before.

"The good thing is we've been through this," Kerr said. "We've went through it last year with [Kevin Durant] ... It wasn't exactly the same timeline, but it was a similar injury and similar circumstances where we had to play without one of our best players. And we felt that appropriate fear and turned it up and got it going -- and then when KD came back, Finals MVP after missing six weeks. So, there's a lot of similarities here, and I think we should feel good about our ability to play through this stuff."

Two years ago, Curry suffered a Grade 1 MCL sprain in a first-round playoff series against the Houston Rockets and missed the next four games. He said his latest scare felt a little different.

"It was a confusing one, because I didn't know exactly what it was," he said of the injury. "I felt my MCL before with the thing in Houston, but I didn't feel that same type of pain, so I didn't know what it was ... It's kind of funny, I can joke about it now, first thing I heard from the crowd was 'where are the high tops,' because they thought it was my ankle. But anyway, it felt good to get back to the bench and just understand my knee is OK, stable, and figure out how bad the damage was in that sense and just stay positive through it. I didn't feel like it was a season-ending or anything. I'll be out for a little bit and get back to playing eventually."

Curry isn't the only one on the mend. Durant (ribs), Klay Thompson (hand) and Draymond Green (pelvic contusion) also are unavailable, but the Warriors expect them back relatively soon.

"I don't think any of this is going to shake us from our ultimate goal of winning a championship," Curry said. "And at that point, we'll look back on all these incidents and laugh about them and understand that at the end of the day, it can make us stronger, it can give us a sense of urgency and kind of jolt the system as we go into the playoffs. As guys start to slowly come back and our team starts to get back to full strength, we can use this to our advantage and kind of galvanize the team and really focus in on what it takes to win another championship."

"And we also know that Steph has a history of coming back strong from injuries," Kerr added. "So, there's a good chance, if all goes well, that he comes back during the playoffs at some point and we're at full steam. So, that's the goal and that's our plan."

Curry said what this team has endured from a health standpoint as of late should bode well for a silver lining.

"There's a blessing in all of this," Curry said. "Hopefully there'll be a story in all of this, and at the end of the day, I'll have an opportunity to get back on the court hopefully before our season is over with and do what I can to help our team win a championship. And that's really all I'm focused on ... Hopefully I can get back as close to 100 percent before I get back so I'm not limited out there." 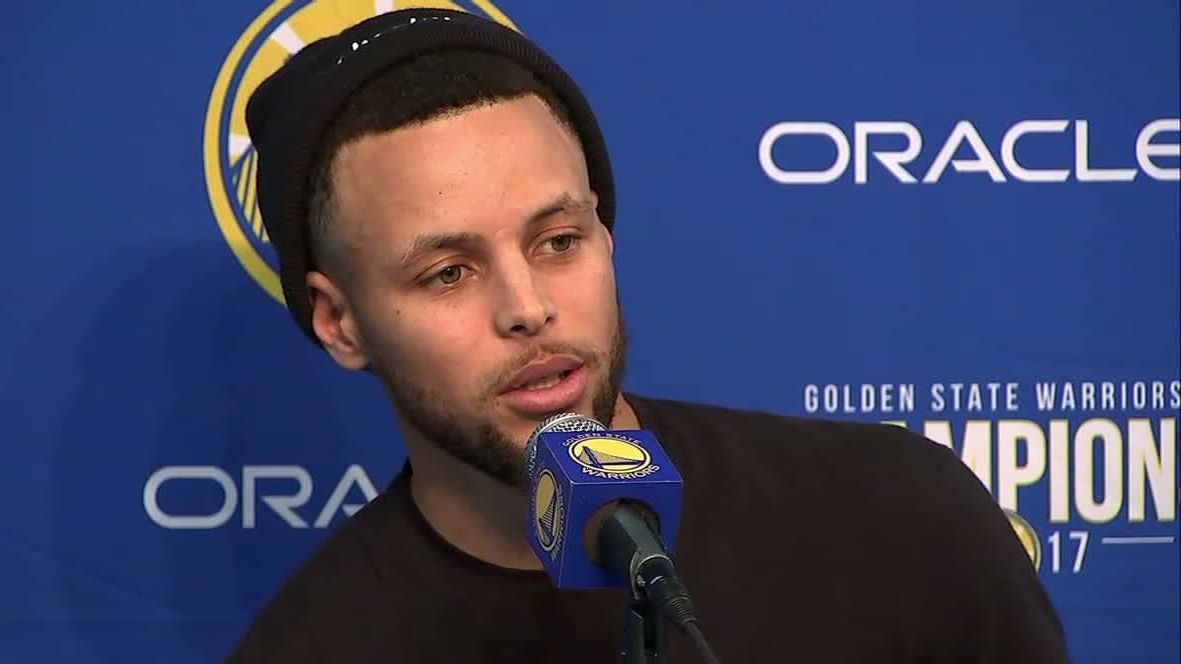 Curry 'staying upbeat' despite injury, hopes to prove Kerr wrong
Steph Curry says he's going to do his job in the rehabbing his left knee injury by saying "hopefully I prove what coach said wrong and put myself in a position to get back soon as possible."