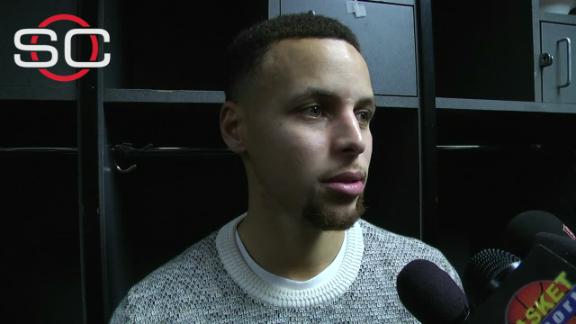 LOS ANGELES -- Golden State Warriors star Stephen Curry aggravated his left shin contusion again Tuesday night in a 109-88 win over the Los Angeles Lakers, but he said he isn't worried about the injury long-term and he just needs to protect it while on the floor.

Curry's shin made contact with Roy Hibbert's leg as Curry made a layup over the Lakers center midway through the third quarter.

Curry limped noticeably after the impact, and Golden State called a timeout on the ensuing offensive possession. During the timeout, Curry took to the bench and had Warriors trainer Chelsea Lane work on his leg. He was able to return to the game before checking out for good in the fourth quarter, with the Warriors up by 30.

"It's just frustrating and annoying and any other adjective you want to throw in there," Curry said after the Warriors beat the Lakers to improve to 33-2, the best 35-game start in NBA history. "Long-term, it's not something that I'll have to worry about. It's just playing through an injury that's there. It doesn't get worse if I play on it, unless I get kicked, and that's happened three times since I did it, so hopefully it won't keep happening again."

"I wasn't going to put him back out there at first, but he was pretty adamant about it," Warriors interim coach Luke Walton said.

"I played with a guy like that," said Walton, who won a championship with Bryant and the Lakers.

Curry suffered the injury Dec. 28 against the Sacramento Kings. The Warriors sat him for two games of a road trip against Dallas and Houston. He returned to action Saturday against the Denver Nuggets and aggravated the injury when Nuggets guard Jameer Nelson made contact with his leg in the second quarter. Curry then was a surprise starter Monday against the Charlotte Hornets after he had missed shootaround.

On whether his shin usually draws this much contact, Curry said, "If it was 100 percent and I got kicked there, probably wouldn't have the same effect. But it's not. There's still a little bit of swelling and a contusion that's more prone to not take a blow very well."

On when Golden State's training staff said he would be 100 percent, Curry said, "A while, like four weeks. I'm not going to sit out four weeks, so just got to figure out how to protect it while I'm out on the floor and keep playing. We've done a good amount and just had a couple unlucky plays, and we'll keep addressing it."