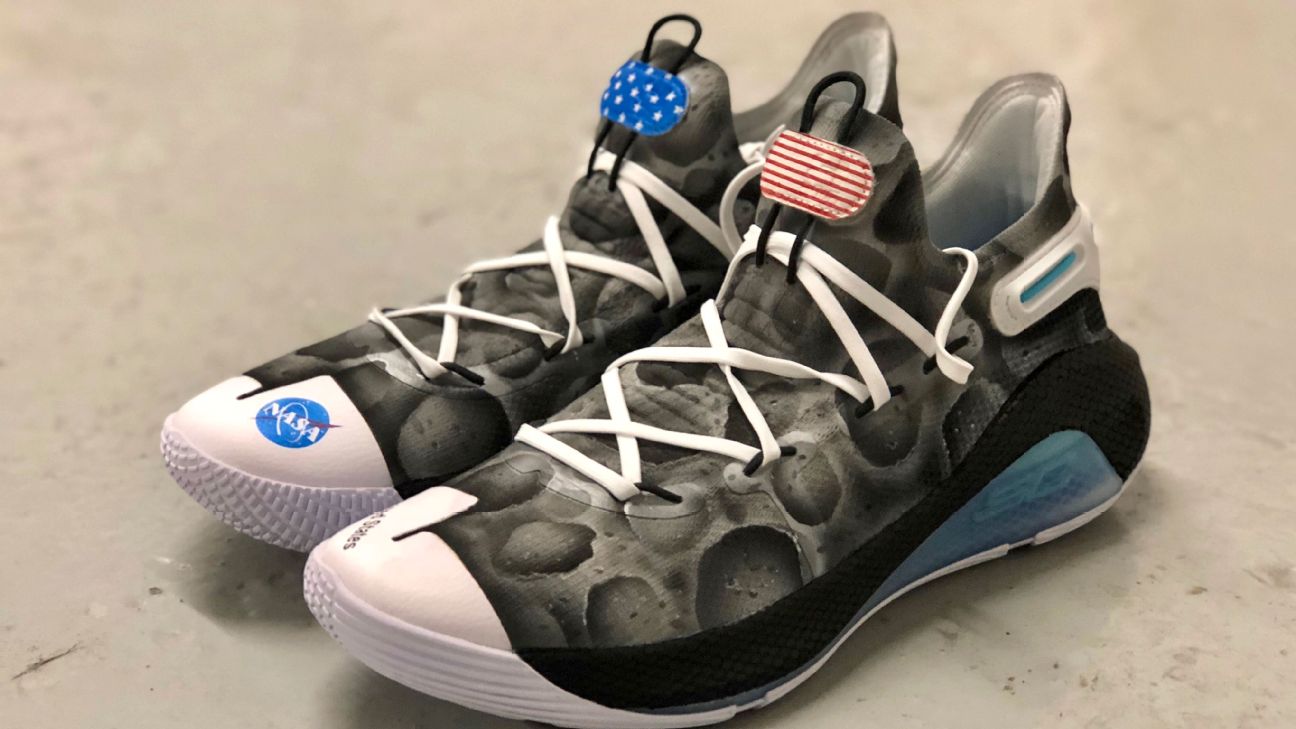 Less than a month ago,Stephen Curry'sflippant, playful claim during a podcast that man hadn't landed on the moon instantly went viral, prompting NASA to immediately offer him an informational tour of the Johnson Space Center during his next visit to Houston.

While the Golden State Warriors won't visit Texas until March, Curry had a special nod to the government agency in store Thursday night. He wore a NASA-themed pair of his Under Armour Curry 6 signature sneakers with the visiting Houston Rockets in town.

Curry, who scored 35 points in a 135-134 overtime loss Thursday, plans to sign the shoes and auction them off on eBay, through a collaboration between DonorsChoose.org and the Stephen and Ayesha Curry Family Foundation. The proceeds from the autographed kicks will benefit local STEM education programs in the Bay Area, fueling young students with more knowledge about science, technology, engineering and mathematics.

It's likely the fact that NASA has landed a dozen total astronauts on the moon during a series of six separate missions from 1969 to 1972 will come up during the classes.

A gray, moon-rock textured graphic can be found along the upper, with a NASA logo icon along the toe tip and the agency's color accents throughout. The stars and stripes of the American flag are each highlighted along the tongue tabs, honoring the USA's distinction of being the only space agency to have completed a manned mission to the moon.

As for the fuss that his comments made a month ago, Curry quickly reversed course on the conspiracy-laden joke he made during former teammate Kent Bazemore's podcast. He broadcasted a conversation with retired astronaut and Navy captain Scott Kelly to his 23 million followers on Instagram Live in the days afterward, learning from the impact his platform can have on impressionable kids.

"I am going to educate myself firsthand on everything that NASA has done and shine a light on their tremendous work over the years," Curry said. "And hopefully people understand that education is power, informing yourself is power ... I'm going to go to NASA and I'm going to enjoy the experience wholeheartedly."

The upcoming charity auction marks the third straight season that Curry has put his game-worn sneakers to a good cause. In late 2016, two pairs of custom-painted Curry 3s helped raise $45,201 for local victims of the Ghost Ship Warehouse Fire that affected the Oakland artist community. Last season, Curry raffled off a handful of game-worn pairs to raise $31,740 for the Curry Family Foundation.