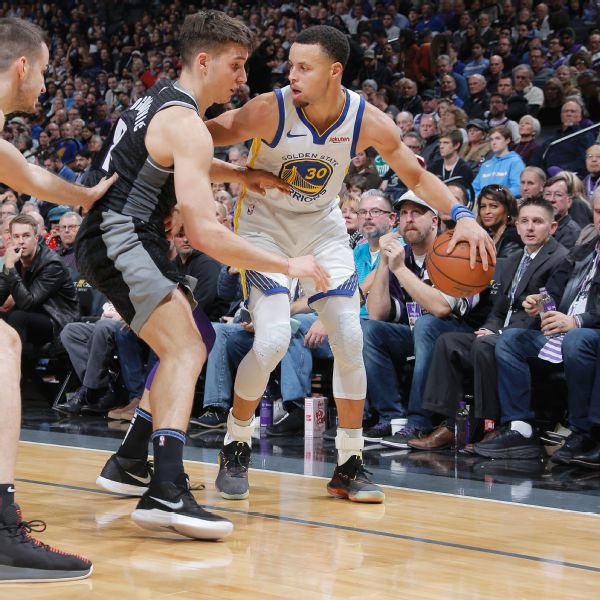 ESPN
By Nick Friedell
SACRAMENTO, Calif. -- The Kings' game-operations staff had some fun with Stephen Curry's recent comments about the moon landing before Friday night's game between Sacramento and Golden State.

As the Warriors' starting lineup was being introduced, an old clip of an astronaut walking on the moon was played on the large video screens inside Golden 1 Center as "Zoom, Zoom, Zoom, We're Going to the Moon," by The Kiboomers blared on the speakers. Warriors players, including Curry, got a chuckle out of the trolling, as several looked up from the bench and laughed.

The jokes didn't stop there, as members of the Kings' game-ops staff held up cutouts of astronauts and the moon itself behind Golden State's basket as Kevin Durant shot free throws during the first quarter.

Curry took the trolling in stride.

Curry got national attention this week after an appearance on The Ringer's "Winging It" podcast in which he questioned whether the moon landing actually took place. In the midst of lighthearted conversation among Curry, teammate Andre Iguodala, Atlanta Hawks players Vince Carter and Kent Bazemore, and co-host Annie Finberg, the group went from talking about what sound a dinosaur made to the possibility that the moon landing didn't actually happen.

"We ever been to the moon?" Curry asked.

After several voices said, "No," Curry responded, "They're going to come get us. I don't think so either. Sorry, I don't want to start conspiracies."

The comments quickly went viral, and even Curry admitted being surprised at just how big the story became. After hearing about the comments, NASA invited Curry to come to the lunar lab in Houston to tour the facility. Curry told ESPN he was joking about the original commentsbut would "1,000 percent" accept NASA's invitation.

Kings troll Curry, show moon landing during starting lineups
As the Warriors' starters are announced, the Kings put the NASA moon landing on the video board.