'Strikeouts are sexy' ... but these pitchers are succeeding without K's 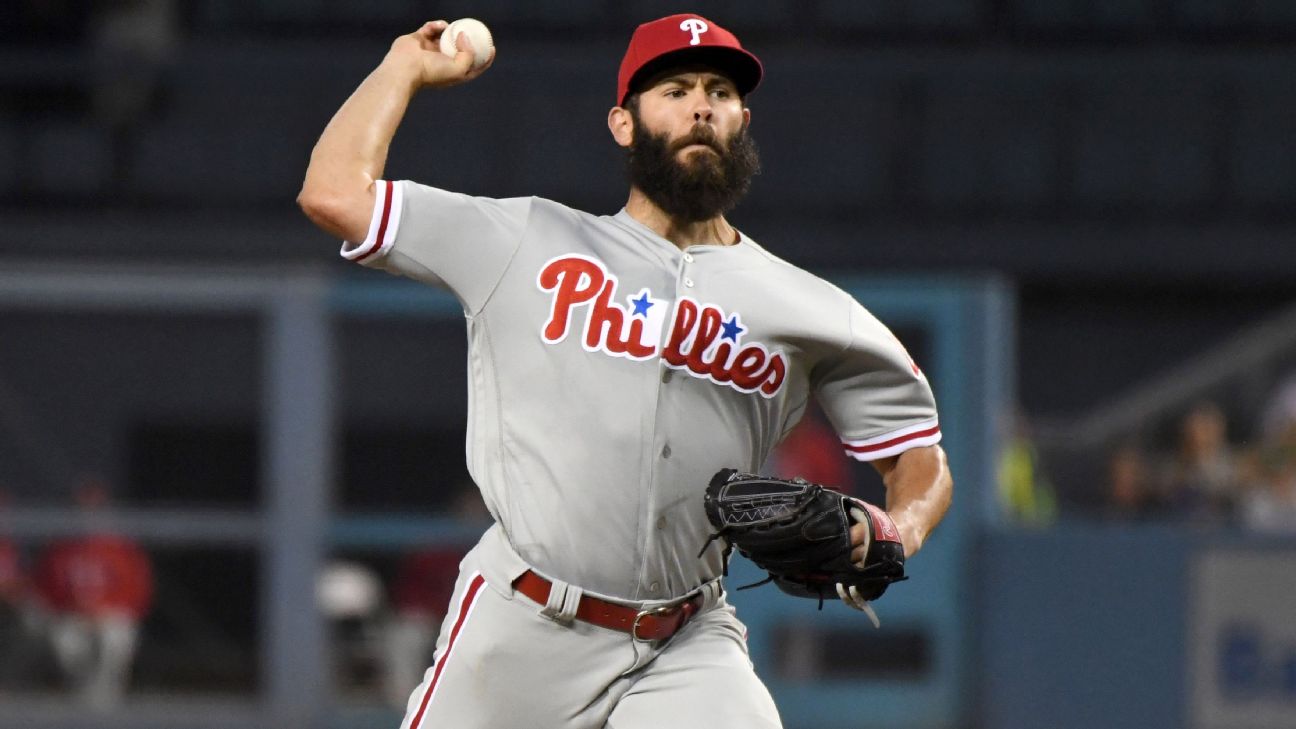 Greg Maddux, who won 355 games and made it to Cooperstown with 97.2 percent of the vote, averaged 6.1 strikeouts per nine innings over 23 seasons. Active starters Doug Fister, Mike Leake and Jason Vargas are slightly ahead of him in that department.

As strikeout totals soar, they're changing the nature of the game and leading to rampant inertia. At the same time, all those whiffs have elevated good and even average pitchers into the company of greats in one particular category.

The numbers might create the impression that the savvy "pitch to contact'' guy has gone the way of the sacrifice bunt and straight-up infield alignments. But a few pitchers continue to thrive the old-fashioned way: by keeping their fielders alert and fans awake while expressing zero regrets when hitters put the ball in play.

Phillies starter Jake Arrieta, one of the foremost practitioners of the art, recently made news for criticizing the team's defensive shifts. But Arrieta's reservations haven't dissuaded him from trying to make hitters put the ball in play. He has seven fielders behind him, and he thinks it's in his best interests to make optimal use of them.

"Strikeouts are up, and that's all people care about,'' Arrieta said. "It's the new thing people are enamored by. But what's the essence of the game as a pitcher? You're trying to get people out. I could easily strike more guys out, but I'm trying to get guys out in two pitches. I'm trying to finish the game. That's the mindset going in.

"If I have a 20- or a 30-pitch inning early in the game, I have to navigate my way through the lineup to get to the seventh or maybe the eighth inning, and if I'm striking out seven or eight guys in deep counts, I'm not going to be able do that. To me, strikeouts don't directly correlate to success. You can punch out eight or nine a game and give up four or five runs. That's not what I'm trying to do.''

But it is what many pitchers are doing. Some recent historical perspective: In 2008, Tim Lincecum was the only MLB starter to average more than 10 strikeouts for every nine innings. So far this season, 20 starters are in that club. And 32 pitchers are averaging at least 9.0 punchouts per nine.

Gerrit Cole K'd 16 hitters in one game and 14 in another. James Paxton struck out 16 Oakland hitters over seven innings. Max Scherzer fanned 15 batters in 6 1/3 innings in one outing and recently threw an "immaculate inning" (three strikeouts on nine pitches). Even rookies are getting in on the fun. St. Louis' Jack Flaherty struck out 13 Phillies in his fourth start, and Milwaukee's Freddy Peralta arrived from Triple-A ball, fanned 13 Colorado Rockies in 5 2/3 innings in his debut and was back in the minors within a week.

Against that backdrop of wall-to-wall whiffing, some pitchers are bucking the trend. Here are six pitchers who have logged ERAs below 4.00 this season with strikeout rates under 7.00 per nine innings:

That group of starters has shown that on any given day, command and a plan can be just as effective as 98 mph heaters. Manaea, who throws his fastball a garden-variety 90.4 mph, struck out 10 while no-hitting the Red Sox on April 21. Liriano recently threw eight innings of one-hit shutout ball against Seattle while inducing 24 called strikes. For fans of old-school pitching, those types of performances are a welcome departure from the norm.

"The game has gone to power,'' Blue Jays manager John Gibbons said. "It's home runs and power arms, especially when you look at the bullpens. But I definitely appreciate the guys who are pitchers. They have less than the other guy, but they're just as effective and sometimes better because they pitch. They roll ground balls and make fewer mistakes. Generally, those are the guys who go deeper in the game for you because they don't chew up all those pitches.''

The most basic measure suggests that the pitch-to-contact types are more efficient as a rule. Mikolas, Manaea, Leake and Hendricks all rank among MLB's top 10 in fewest pitches per inning.

"I pitched in Colorado for five years, and I got used to pitching to contact,'' said Chacin, who has a 3.32 ERA with the Brewers and a strikeout rate of 7.08 per nine. "With the altitude, you don't want a lot of balls in the air. I want to strike out people, for sure. Strikeouts make you feel good. But my game has always been getting ground balls. Miller Park is a hitting ballpark, so I want to focus on keeping the ball down. It helps me throw more innings, too.''

Ask pitchers and pitching coaches to define the term "pitching to contact,'' and you'll get a variety of responses. But the last thing it means is simply pumping fastballs down the middle.

"It means you're challenging the zone -- not playing the chase,'' St. Louis pitching coach Mike Maddux said. "There's a time to play the swing-and-miss and play the chase. But you can't strike a guy out with the first pitch, and you can't strike him out with the second pitch. The less they see of you, the better you are, so why not get it done right away? That's the premise.

"They call it a perfect inning when a guy gets three strikeouts on nine pitches. Everybody 'oohs' and 'ahhs' at that. But really, the perfect inning is three pitches and three outs. You can't do any better than that.''

The downside to pitching to contact is uncertainty. When a pitcher strikes out 12 batters in six innings, he removes luck from the equation. Conversely, the perception exists that pitchers who don't miss bats are destined to backslide eventually.

Maddux was Milwaukee's pitching coach in 2004 when closer Danny Kolb saved 39 games while striking out 21 batters all season. In Texas, he watched Matt Harrison win 18 games and make an All-Star team in 2012 by churning out ground balls and whiffing a meager 5.6 batters per nine. He thinks pitch-to-contact types get a bad rap as second-class citizens.

"Strikeouts are sexy,'' Maddux said. "On a strikeout, your fielding percentage is really, really high. But god dang, if we're all that smart, let's just find a way to make sure the fielders are in the right place every time. It's not a crystal ball. To say somebody is on borrowed time because you're not striking enough guys out, I would have to disagree with that.''

Some pitchers who rank high in the contact-efficiency spectrum have evolved to compensate for reduced velocity or wear and tear over time. In 2009, Sabathia threw his fastball 94 mph and used it more than 60 percent of the time. This year, at age 37, he uses his slider and cutter about 70 percent of the time. Sabathia is averaging 6.9 strikeouts per nine innings compared to 8.9 at his career peak with Cleveland and Milwaukee in 2008.

Other starters -- including Keuchel, Arrieta, Mikolas and Ivan Nova -- are particularly reliant on the ground ball. Arrieta's 56.6 percent ground ball rate this season is second highest in baseball behind San Diego'sClayton Richard. It reflects his transition from a four-seam fastballer through much of his career to a sinking, two-seamer devotee. It's no accident that Arrieta is tied with Leake for the MLB lead with 14 double-play groundouts and has allowed only four home runs all season.

"Four-seamers get whacked,'' Arrieta said. "When they're not well-located, those are the balls that get hit over the fence. If I can command a sinker about as well as I can a four-seam and get a lot more movement, I'm going to do that.

"What I love is, even in a 2-0 count, there's no angst. There's no anxiety. I know I can throw a sinking fastball in the middle of the plate down and get a ground ball or weak contact or a lazy fly ball to the outfield. That's a good feeling.''

As his peers keep piling up strikeouts, Arrieta will continue to read swings, monitor his pitch counts and make adjustments. Despite his recent comments on the Phillies' shifts, he's committed to making each of his starts a collaborative endeavor.