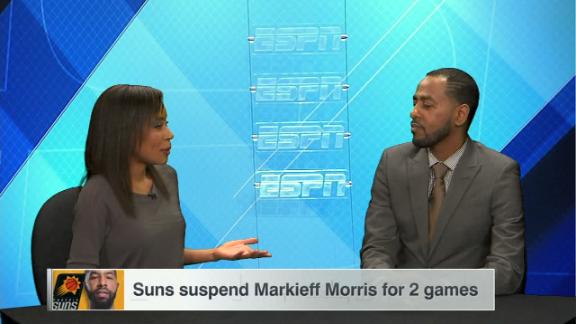 The Phoenix Sunssuspendedforward Markieff Morris for two games without pay Thursday for conduct detrimental to the team, after he tossed a towel toward coach Jeff Hornacek on Wednesday.

The incident took place in the fourth quarter of the Suns' 104-96 loss at home to the Denver Nuggets. It was the third straight loss for the Suns (12-19).

With 9:47 to play and Denver leading 84-75, Morris was taken out of the game. He threw the towel at Hornacek, who in turn picked up the towel and threw it back toward Morris.

"My frustration got the best of me [Wednesday] night," Morris tweeted Thursday. "It won't happen again. I apologize to Jeff. My teammates told me I hit Coach with the towel. In no way was that towel intended for him. I just want to help my team win so much. That's my focus moving forward."

Morris included the hashtag "Foe,'' short for "family over everything." Morris repeatedly tweeted his desire in the offseason to be traded after the Suns dealt his twin brother, Marcus, to theDetroit Pistons. Morris made multiple trade demandsthis past offseason, and sources have told ESPN.comthat the Houston Rocketshave him on their radar.

Morris had six points on 2-of-8 shooting and one rebound in 12 minutes against Denver. The Suns were outscored by 13 points when he was on the floor.

The suspension will cost Morris $145,455. He will miss home games Dec. 26 against thePhiladelphia 76ers and Dec. 28 against the Cleveland Cavaliers.

"We try not to be punitive with these kind of things," general manager Ryan McDonough said Thursday. "We try to be fair. That's why we consulted with the league. Sometimes, these things do get emotional. We asked for their opinion. There was precedent for these kind of situations, but we would've done the same thing if it was any of the other 14 players on the roster."

Morris is averaging 10.8 points, 4.8 rebounds and 23.5 minutes in 22 games this season. A Kansas product, he has played all five of his seasons with the Suns, who selected him 13th overall in the 2011 draft. Morris has played poorly through most of the season, losing his starting job several weeks ago. Several of the games he missed were due to coach's decision.