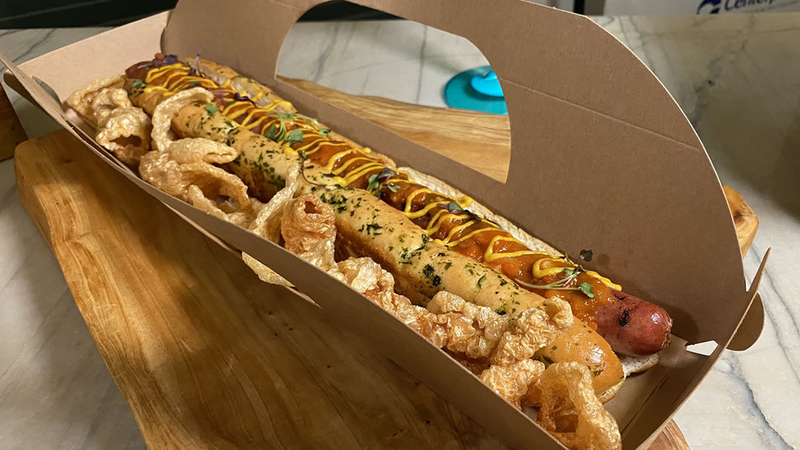 MIAMI (KGO) -- As people eagerly await Super Bowl Sunday, they are also getting their party food in order.

"You will smell Miami as soon as you walk in," Executive Chef Dayanny De La Cruz said. "You will feel Miami. I think even when you come to Miami without the Super Bowl, that's the feeling. The feeling is that we are absolutely putting the city in here."

These will be stadium snacks that no one has ever seen.

And of course, plenty of seafood.

Oh boy, work thought it was going to be tough to get up at 6am PST to go to the stadium. Not when this is the story! Tune into @abc7newsbayarea tonight to see what cuisine will be featured at #SuperBowlLIV! (Hint: there’s plenty of Miami flair!) #49ersOn7 https://t.co/t0rVUAsxaY pic.twitter.com/deZCg2mkO1

So what should fans try first?

"I think on the general concourse, you have to try the signature Cubano Sausage," Corporate Executive Chef Carmen Callo said. "A recipe inspired by our onsite executive chef and her family growing up. It's going to impact you with a taste of Miami in that very first bite.

If you're looking for the mustard and ketchup and the traditional stuff, you won't find it here.

It's a little bit different and, on game day, it's going to be a lot bigger than usual.

"In our premium areas, I think you definitely want to try the paella in the club areas," Callo said. "That was a recipe shared by one of our executive chefs from Madrid. It's authentic and it's unbelievable."

In addition to tasty, the paella and all seafood served has a special meaning behind it, thanks to Ocean Conservancy.

"These are ocean-friendly seafood choices," Ocean Conservancy Chief Scientist George Leonard said. "They're taking the pressure off of oceans, primarily because they are farmed instead of caught in the wild."

The homegrown recipe shows in the flavors.

The chef's recommendation for food is the 18" Cuban Dog that can be found in the concourse and the clubs on #SuperBowlSunday and the South Florida Seafood Paella exclusively found in the club levels at @HardRockStadium. Take a look at how they tasted! https://t.co/t0rVUAsxaY pic.twitter.com/w2SOPfAcUq

"As you can imagine, we have been planning this event for over a year and a half and the excitement building up to this week is incredible," Callo said. "We're literally putting out tens of thousands of pounds of food. It's just amazing the amount of food that's going to come in and get processed and delivered for our guests."