Terrell Owens gets HOF ring at halftime of 49ers-Raiders game 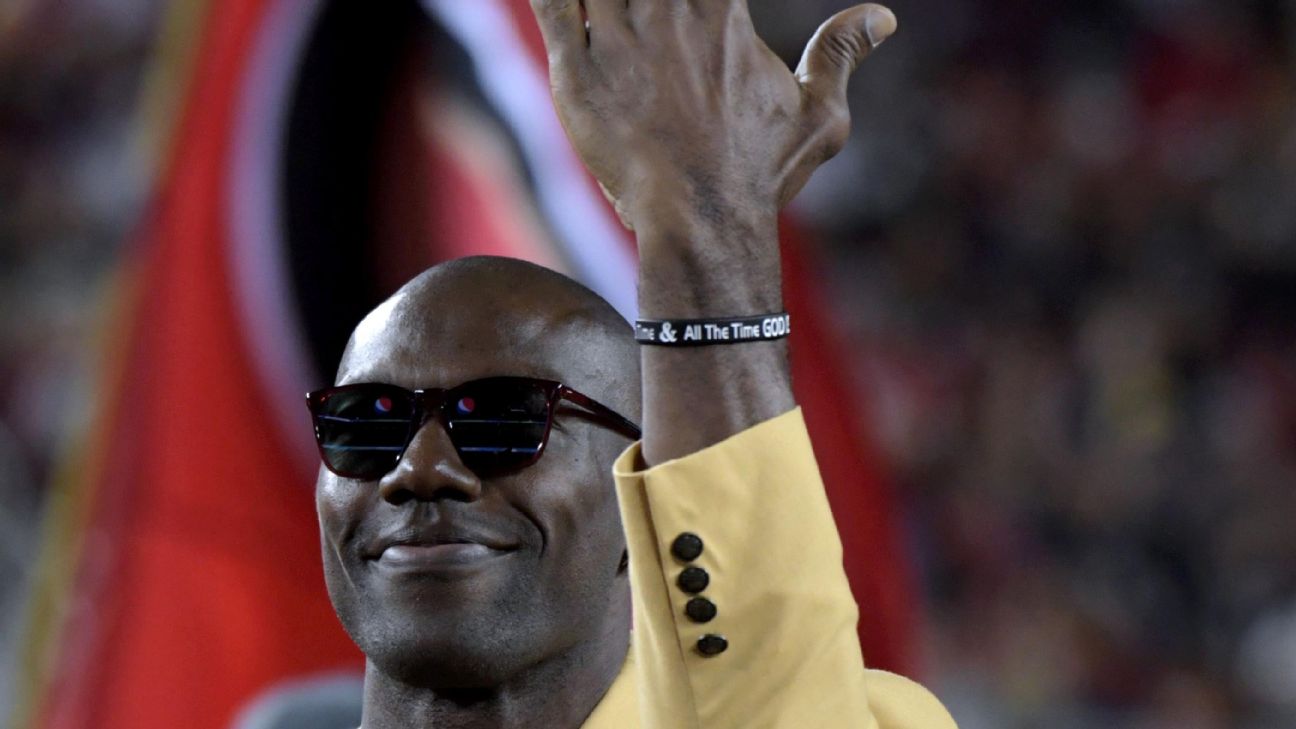 SANTA CLARA, Calif. -- Terrell Owens came back to his roots to get his Hall of Fame ring.

Owens was presented with the ring during a ceremony at halftime of Thursday night's game between the San Francisco 49ers and the Oakland Raiders.

Owens spent his first eight NFL seasons with the 49ers, establishing himself as one of the best players in the game during his tenure in San Francisco.

"This is awesome," Owens said before the game, while wearing his gold Hall of Fame jacket. "This is an opportunity to give something to the fans. Ever since I left in 2003 and went on and did some great things, but this is where it started, my first eight years of my career."

Owens was voted into the Hall of Fame earlier this year but skipped the induction ceremony in Canton, Ohio, to hold his own celebration at his college in Chattanooga, Tennessee.

Owens said he was upset at the voters who made him wait three years for the honor, saying he believed they brought off-field issues into their deliberations instead of focusing solely on what Owens did as a player.

"No regrets at all," Owens said about his decision to skip the ceremony. "If anybody knows who Terrell Owens is outside the media portrayal of me throughout the course of my career. They know what I did. I stand by what I did. ... When they tried to bring other things outside my body of work and my accomplishments, that was an issue for me. My stats spoke loudly. They spoke for themselves."

Owens had a mostly sensational 15-year career playing for San Francisco, Philadelphia, Dallas, Buffalo and Cincinnati. He played eight years with the 49ers before bouncing around the league as he frequently wore out his welcome at his stops along the way.

But he always produced, ranking second all-time to Jerry Rice in yards receiving (15,934) and third to Rice and Randy Moss with 153 touchdown catches. He was a five-time All-Pro, a six-time Pro Bowl pick and one of the most entertaining players of his generation.

"I can't look back and say I would have done anything differently," he said. "I wanted to be a 49er for the rest of my career if that could happen, but not many people start and finish where they started. Look at Jerry (Rice), look at Joe Montana."

Owens was part of eight playoff teams but reached the Super Bowl only once after joining the Eagles in 2004. He gave a heroic performance in Philadelphia's 24-21 loss to New England, catching nine passes for 122 yards after defying doctor's orders and returning to play on his surgically repaired ankle six-plus weeks after an operation.

Owens had many memorable moments in his career, but the one that stands out most for him from his time with the 49ers came in a playoff game Jan. 3, 1999, against Green Bay.

After dropping several passes early in the game, Owens caught the game-winning 25-yard touchdown in the final seconds in a play dubbed "The Catch 2," as the sequel to Dwight Clark's game winner in the 1981 NFC title game against Dallas.

Owens then was selected an All-Pro for the first time the following season.

"That was a big catalyst for my career," he said. "For me to come up with a big play at that particular time was monumental, very key for the development of me. It helped my confidence."