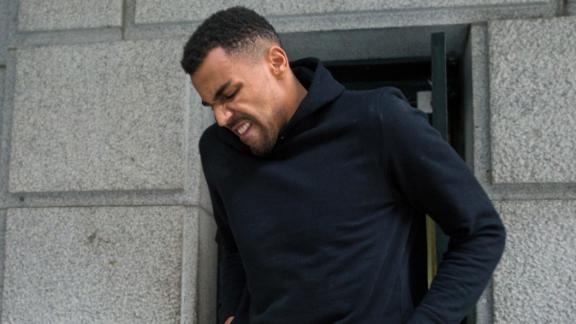 
Sefolosha suffered a broken right fibula and ligament damage at the scene of his arrest early on the morning of April 8.

"On advice of counsel, I hope you can appreciate that I cannot discuss the facts of the case," Sefolosha said in his first public comments since the incident. "Those questions will be answered by my attorney in a court of law. I will simply say that I am in great pain, have experienced a significant injury and that the injury was caused by the police."


The Internal Affairs bureau of the New York City Police Department has contacted lawyers for Sefolosha about interviewing him as a complaining witness in the incident, sources told ESPN.com.


Sefolosha will have surgery this week and will miss the remainder of the season, including the playoffs. He thanked family, friends and the Hawks in his public comments Tuesday.


"This has been a difficult time for me, and I truly appreciate the support I have received from everyone," Sefolosha said. "I am extremely disappointed that I will not be able to join my teammates on the court during the playoffs and apologize to them for any distraction this incident has caused. I will be cheering for them every step of the way and will be diligent in my rehabilitation."

Sefolosha was arrested at the corner of 10th Avenue and West 17th Street in Manhattan's Chelsea district. The police report filed by officer Johnpaul Giacona of the 10th Precinct stated that Sefolosha was interfering with the establishment of a crime scene in front of 1Oak Club, where Pacers forward Chris Copeland wasstabbed in a separate incident.


But a pair of videos published on TMZ late last week challenge several specifics from the report.


One video, shot by a witness, appears to show an officer pulling out his baton as a group of officers wrestled Sefolosha to the ground. In addition, the arrests of Sefolosha and Hawks center Pero Antic appear to be more than 100 feet from the site of Copeland's stabbing.


Asked about the first video following his public comments, Sefolosha said, "I don't want to go into details on anything but I think the video speaks for itself."


The complaint submitted by Sefolosha claims he was injured by police at the scene.


"We are also investigating the tactics of the police in this case," Sefolosha's lawyer Alex Spiro said Tuesday.


NBA spokesman Mike Bass issued a statement Tuesday that said: "We support Thabo during this difficult time and wish him success with his rehabilitation. The league continues to work to obtain more information about the circumstances surrounding Thabo's arrest and injury."


Officers involved in the arrest and injury of Sefolosha have retained legal representation, the Patrolmen's Benevolent Association confirmed on Tuesday. Although the union characterized such an action as standard operating procedure for an on-duty incident, sources close to the defense said that the investigation by the department has proceeded briskly.


Sources close to the defense describe the current legal process between Sefolosha and the NYPD as inordinately complex, with criminal, civil and administrative components.