The best football tradition for each Top 25 team 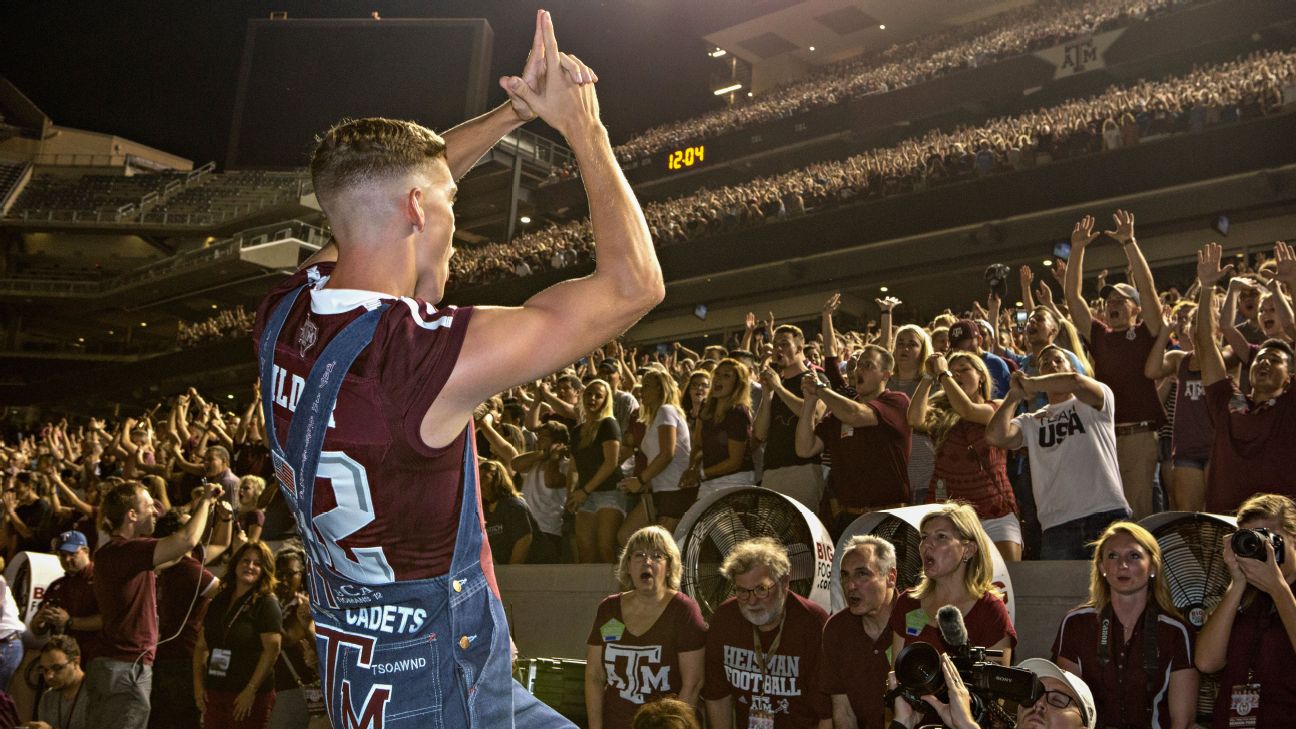 More than anything, the traditions are what make college football so much fun. Some have been going on for decades, while others like the Iowa Wave are recent additions but are already an indelible part of the game.

Here is the best football tradition for each team in our post-spring power rankings.

The team's run down the hill into Memorial Stadium before kickoff is the obvious tradition that comes to mind, but the better one to focus on comes after the game -- the one uninitiated observers seem to always get wrong, much to Clemson's consternation. After each game, win or lose, Tigers fans pour onto the field. The coaches and players mingle, take pictures, sign autographs. But every year, at least once, Clemson fans get criticized for "storming the field" after a victory that wouldn't seem to warrant such celebration. Nope, it's just tradition. -- David M. Hale

Can a school's best football tradition also be one of its most controversial? Because for three years, the classic country hit "Dixieland Delight" couldn't even be played inside Bryant-Denny Stadium because of some rather colorful interludes. Let's just say there were some four-letter words directed at rival Auburn that weren't suitable for children. But when the song is cleaned up, it really is one of the cooler scenes to watch play out in the SEC. In the middle of the game, the first chords of the song strike up and everyone is immediately ready to go. It's a full-throated singalong featuring 101,821 fans (minus some opposing fans who don't know how to have fun). -- Alex Scarborough

There are going to be some folks who claim Georgia wasn't the first to get in on the 21st-century version of holding up a lighter at a concert, but at the very least it popularized doing so. The relatively new tradition, known as "Light Up Sanford," began as a plea through social media and has since become a fixture of night games in Athens. Right before the start of the fourth quarter, when everyone turns on their cellphone flashlights and the Redcoat Band plays the "Krypton Fanfare," it truly is a sight to behold. -- Scarborough

The Sooner Schooner has become synonymous with college football pageantry, racing onto the field after every Oklahoma score. It has been involved in some mishaps over the years, but the Sooner Schooner has gleefully been in overdrive mode lately trying to keep up with Lincoln Riley's scoring machine. -- Jake Trotter

Beating Michigan. Seven years in a row (and 14 of the past 15) is long enough to be deemed a tradition in modern-day college football, is it not? The victories have often been memorable and frequently launched the Buckeyes forward into a championship game in recent seasons. If the Wolverines end the drought in the wake of Urban Meyer's retirement, Ohio State can always fall back on that big, beautiful sousaphone "dotting the i" as the band finishes unfurling its script Ohio formation. -- Dan Murphy

Even newer traditions have a way of feeling timeless on Saturdays in South Bend, Indiana. Notre Dame didn't install its "Play Like A Champion Today" sign in the current location at the exit of its locker room until 1986, but it has since become an iconic pregame image to see the Irish tapping the blue-and-gold placard on their way to the field. -- Murphy

Michigan coach Fritz Crisler had his new team's cowhide helmets painted blue with a bright maize winged design upon his arrival in 1938. Crisler thought the paint would help his receivers stand out in a crowd when they went downfield for a pass. The design has been standing out as one of sports' most instantly recognizable uniform designs for more than 80 years. -- Murphy

"Two bits, four bits, six bits, a dollar. All for the Gators, stand up and holler!" Since 1949, every Florida home game has started with the famous cheer, and it's all thanks to George Edmondson, who decided to give his Gators a lift during a game against The Citadel to drown out boos from around the stadium. His yellow shirt, blue-and-orange striped tie and whistle continue to live on. After his retirement in 2008, Florida has had celebrity Mr. Two Bits lead the pregame cheers. -- Andrea Adelson

There's Garth Brooks' "Callin' Baton Rouge." There's Mike the Tiger. There's so much that goes into an LSU football game, you can't fit it into a confined space. But peak LSU is LSU at night, and the thing that sets it up every time are the words repeated by public-address announcer Dan Borne: "Ladies and gentlemen, the sun has found its home in the western sky, it is now Saturday night in Death Valley!" You know how Star Wars fans go gaga over the opening crawl, with its iconic music and signature typography? Borne's prologue to an LSU night game is the closest thing college football has to that moment. -- Scarborough

I mean, does it get any better than a giant duck riding a motorcycle onto the field inside Autzen Stadium before every home game? Sometimes he's holding a giant flag. Other times he's just emphatically pointing to fans. Regardless, it's a giant duck, riding a Harley-Davidson onto a football field. -- Edward Aschoff

Live mascots are one way college football distinguishes itself from other sports. And Bevo, a longhorn steer, is among the best. He actually set the tone for last season's Sugar Bowl, ferociously charging Uga the bulldog during pregame festivities. Uga escaped the incident. But the Longhorns went on to roll over Georgia on the field. -- Trotter

Most football traditions belong to game day, from the pregame walk to tailgating to the traditional cheers shouted in unison during games. But Texas A&M couldn't wait. It gets going early -- as in, the night before, at theMidnight Yell. The night before every home game, thousands of fans pack Kyle Field, where the yell leaders lead everyone in cheers and the singing of the "The Aggie War Hymn." What started out as a way to practice yells for newcomers has become a time-honored tradition. -- Scarborough

Playing in Happy Valley against Penn State is difficult enough because of the size of the crowd and how loud that crowd stays throughout the game. But, for whatever reason, it becomes that much more intimidating when the Nittany Lions hold a whiteout game at night. The entire crowd is decked out in white, on its feet, screaming and chanting, creating an incredible environment. The crowd gets so loud during these games, it has been known to shake the press box.-- Tom VanHaaren

If you have ever been inside Spectrum Stadium when "Kernkraft 400" by Zombie Nation starts playing, then you have felt a momentary sense of panic as the entire arena starts swaying with the weight of 45,000 people jumping up and down screaming "U-C-F Knights!" The tradition began when Spectrum Stadium opened in 2007, and has earned the venue the nickname the "Bounce House." With two undefeated regular seasons in a row, the chant has earned more national notice, and even more terrifying swaying. -- Adelson

Clearly when you can take a boat out and, uh, sailgate before every home game, you've got one of the best traditions around. For each Washington home game, tons of fans gather in Lake Washington's Union Bay for a massive, aquatic party just a stone's throw from Husky Stadium. -- Aschoff

Between the third and fourth quarters of Utah home games, Terri Jackson lets loose with a series of dance moves that absolutely sets things off inside Rice-Eccles Stadium. Dubbed "Crazy Lady," Jackson and her wildly chaotic dances are beloved by Utes fans. When folks need energy going into the final frame, Jackson generates it. -- Aschoff

Look, the Stanford band doesn't take itself seriously at all, and that's what makes it kinda great. The notes are off. The only uniformity is the total lack of it with game-day attire from members. But it's so cool and unique to see a bunch of kids, some dressed as superheroes for no reason at all, blaring off-key notes from their horns, or quite literally just banging on their drums because it's fun. Halftime shows at Stanford are certainly something to marvel at.-- -- Aschoff

Others can claim to have started the tradition of pregame walks, but no one popularized it like "Tiger Walk." It's everywhere now. And while Auburn's version has evolved into a less chaotic spectacle than when it began, its essence remains. The screaming. The cheering. The jam-packed crowds. The stretch of Donahue Drive that connects the football facility and Jordan-Hare Stadium begins filling by the thousands about 30 minutes before the walk begins. If you're late, you won't see anything and you won't be able to move. But as coaches and players make their march into the stadium, it's the perfect surge of energy to start a game day. -- Scarborough

The best Wazzu tradition doesn't even take place on campus on game days. If you know anything about the school, you know that its flag is flown proudly during every broadcast of ESPN's College GameDay. Started by Wazzu alum Tom Pounds back in 2003, seeing that flag on GameDay is one of the sport's best game-day traditions. Thanks to a Wazzu booster organization, Ol' Crimson finds its way to every single GameDay spot. -- Aschoff

There are some goose-bump-inducing sights in college football, and Nebraska's Tunnel Walk is near the top of that list. The players, led by coach Scott Frost, walk from the Memorial Stadium locker room through a tunnel of screaming, cheering fans out to the field. The pregame tradition had the Alan Parsons Project song "Sirius" as its soundtrack in the past but featured a mix of different songs in 2018. The songs were coupled with a different theme for each week and typically still played a few seconds of "Sirius" before jumping into the weekly theme that included power, speed, grit and featured songs by DMX, AC/DC and DJ Kool, among others.-- VanHaaren

Every home game at Camp Randall Stadium, the student section looks forward to the end of the third quarter. That's when the stadium speakers blare the 1992 hit "Jump Around" by House of Pain and the students, well, jump around. They jump and sing along for approximately two minutes, shaking the stadium and press box and creating one of the more fun traditions in all of college football. According to Wisconsin's official website, the tradition started in 1998, and while it has nothing to do with the game itself, it has become a fan favorite.-- VanHaaren

After any Syracuse game, fans storm out of the Carrier Dome and down South Crouse Avenue to the best pizza spot on campus, The Varsity. The place will be mobbed with fans, including the Syracuse marching band, which will play a few tunes before the official flipping of the banner -- a ritual in which banners of each Orange opponent hung along the back wall of the restaurant are flipped upside down if Syracuse wins. -- Hale

Affectionately known as the Iowa Wave, the Hawkeyes' best tradition started only during the 2017 season. The University of Iowa's Stead Family Children's Hospital overlooks Kinnick Stadium and has a viewing area where patients and their families can watch Iowa football games. During that 2017 season, fans started to turn away from the football field at the end of the first quarter and wave to the children in the hospital. It has grown so popular that the Iowa team and coaches, as well as the opposing team and coaches, are now turning and waving to the children during the game.-- VanHaaren

Army-Navy might be the sport's most tradition-rich rivalry. The final game of the college football regular season, Army-Navy is preceded by the time-honored "March On" ritual, with both student bodies -- cadets and midshipmen -- marching onto the field. The two service academies have now met 119 times. And though Navy leads the series, Army has won the past three. -- Trotter