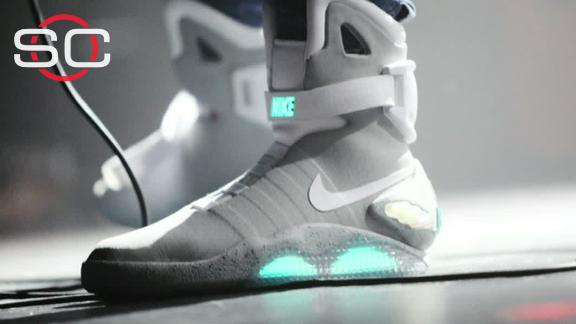 Nike will release a limited amount of pairs of "power-lacing" shoes next spring modeled after the ones worn by the character Marty McFly in the 1989 film "Back to the Future Part II," the company announced Wednesday. The announcement comes on a significant date: Oct. 21, 2015, is the date Marty McFly and Doc Brown traveled to in the film.

The number of pairs that will be made available was not disclosed. The shoes will be auctioned off, and the beneficiary once again will be the Michael J. Fox Foundation for Parkinson's Research.

The latest edition of the shoe features "power laces" -- it senses when the wearer steps in it, and the laces tighten around the foot as the Nike logo on the tongue illuminates.

Nike CEO Mark Parker presented the first pair on Wednesday to Fox, who was expected to unveil them on "Jimmy Kimmel Live."

The foundation, set up by Fox, who played Marty, received $9.4 million in donations thanks to a 10-day auction in 2011, when 1,500 pairs were auctioned on eBay. Sales of the shoes generated $4.7 million, and that figure was matched by Google co-founder Sergei Brin and his wife.

Nike released a version of the shoe in 2011, but those shoes had just lights and not the power laces. The most that was paid for a pair of those shoes was $37,500, by British rapper Tinie Tempah.

Nike sneakerheads and "Back To The Future" trilogy buffs got excited when it was revealed that Nike filed for extensive patents to self-lacing shoes in both 2009 and 2013.

While Nike started doing this as a fun project, Parker said that reinventing the conventional lacing system could be applied to future products.

"We started creating something for fiction, and we turned it into fact, inventing a technology that will benefit all athletes," Parker said in a release.