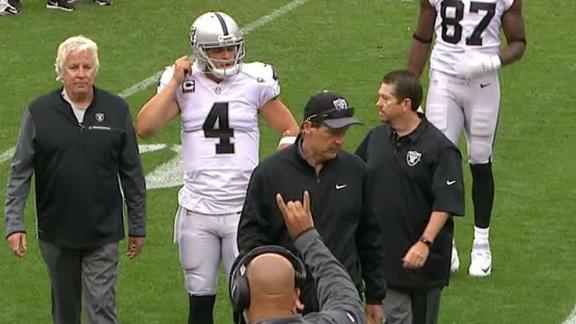 ESPN
By Paul Gutierrez
DENVER --Raiders quarterback Derek Carr suffered a lower back injury on a sack late in the third quarter of Oakland's 16-10 loss at the Broncos on Sunday and did not return to the game.

Raiders coach Jack Del Rio did not think the injury would be a long-term issue.

"I think he just got roughed up there," Del Rio said. "He got tackled, and something caused his back to spasm up. I didn't see much that would indicate that he would be injured, but his back spasmed up, so that's what it was."

After being twisted down awkwardly by Adam Gotsis, Carr grabbed at his lower back and stayed prone on the ground. After several minutes, he was helped up and walked slowly off the field. After being examined in the blue pop-up tent on the Raiders' sideline, he walked back to the Raiders locker room.

"Pain," Carr said, describing what he felt when he went down. "My back didn't feel too good.

"At first, you're like, 'Oh my gosh, what the heck?' But you kind of give it a little bit and let as much of the pain wear off as it can and go from there. I tried to come in and let [trainers] work on it. I tried to throw and those kinds of things. It just wasn't ready yet -- not saying it won't be [ready next week]. It just wasn't ready today. I tried to do anything I could to be back out there, but I just couldn't."

EJ Manuel replaced Carr, who was 10-for-18 passing for 143 yards and a 64-yard TD pass to Johnny Holton, and Manuel nearly led the Raiders to a comeback win. But his deep pass to Amari Cooper was intercepted by Justin Simmons at the Broncos' 8-yard line with less than two minutes remaining.

Carr suffered a fractured passing pinkie finger on a snap from center Rodney Hudson on Nov. 27 and a broken right fibula in Week 16, but he made a full recovery by training camp. He signed what was then the richest contract in league history, for $125 million over five years, in June.

"It won't be fun," Carr said of the flight back to Oakland. "But at the end of the day, no one really cares. I'll do my best to get comfortable, but as soon as I see my two baby boys, it will feel a little bit better."

Carr optimistic he will play next week
Derek Carr explains how he is feeling after leaving the game on Sunday with back spasms and believes he will not miss anytime.
Report a correction or typo
Related topics:
sportsespnnflej manuelback injuryoakland raidersderek carr
Copyright © 2020 ESPN Internet Ventures. All rights reserved.
More Videos
From CNN Newsource affiliates
TOP STORIES