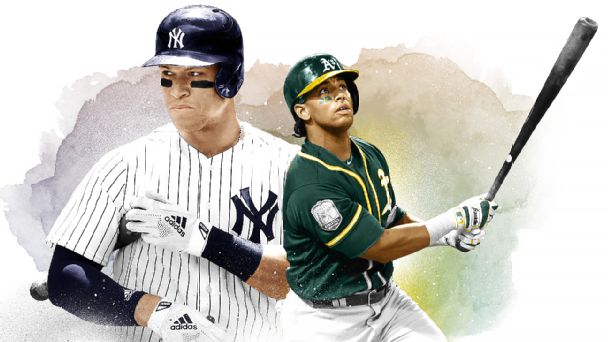 Yankee Stadium, old and new, has hosted 13 winner-take-all games in the postseason, seven of them won by the Yankees. No. 14 will be the American League wild-card game between theNew York Yankees and Oakland Athletics, who won 100 games and 97 games this season, respectively. The loser will deserve far better than playing one game, and going home. But these are the house rules, the decider house rules, if you will, and anything can happen.

Three reasons the Yankees will win

1. The starting pitcher.The A's don't have a perfect choice. Sean Manaea was lost for the season with a shoulder injury. So instead of going with another starter, such as Mike Fiers or Edwin Jackson, the A's decided to go with an opener, Liam Hendriks, then have that deep, powerful bullpen ready for literally the second inning. The Yankees will start 19-game winner Luis Severino, their ace who had a 2.10 ERA through June but hasn't been the same pitcher since. Still, in his past three starts, his fastball command has gotten better, as has the shape of his slider. Plus, he is right-handed, and, as one AL manager said, "Against the A's, make sure you have a right-handed pitcher to deal with Khris Davis." Severino doesn't have to go seven innings; he just has to keep it close for four or five innings, if that, and then give way to the overpowering Yankees bullpen, which is now healthy, and, by a wide margin, led the AL in bullpen strikeouts. That same AL manager, when he was asked who the Yankees should start in the wild-card game, said "Chad Green." Green is one of those dominant Yankees relievers.

2. Yankee Stadium. The Yankees went 53-28 at home this year; only the Red Sox were better at home. In the Bronx, the Yankees averaged 5.6 runs per game (second best in the majors) with an OPS of .811 (third best in MLB). This won't be like the 2015 wild-card game at Yankee Stadium when that place was dead, Dallas Keuchel dominated and the season ended quietly. Yankee Stadium is alive again. It is an intimidating place to play because the Yankees are loaded, they are fun to watch and the fans show up ready to go. The Yankees wanted no part of flying 3,000 miles to Oakland to play before 35,000 lunatics (a compliment). And playing this game in New York, should the Yankees win -- it's a whole lot easier to get to Boston from New York than from Oakland.

3. Power. The Yankees hit the most homers in a season in major league history -- 267, three more than the 1997 Mariners. The Yankees became the only team to ever have 12 players with at least 10 homers in a season; they are so deep, second baseman Gleyber Torres, who hit 24 homers this year, likely will hit ninth in the wild-card game. Indeed, the Yankees also became the only team in history to get at least 20 homers out of all nine spots in the batting order. If they can get Aaron Judge, Giancarlo Stanton and Gary Sanchez going at the same time, which hasn't happened all season, the Yankees will be a nightmare for opponents.

One reason I will be completely wrong

The A's are tough. In May, long before the A's got smoking hot, Red Sox manager Alex Cora said the A's "take the toughest at-bats in our league." In August, by which time the A's were rolling, Cora said it again, but with more emphasis. The A's wear out pitchers with their patient at-bats and with their relentless approach, and that gives them a chance not just in this game, but in any postseason series. Plus, the Oakland bullpen is tremendous -- it was second in the AL in bullpen ERA and second in the league in relief strikeouts. They have four guys who can close a game, but none better than Blake Treinen, who had a fabulous season; his hard sinker is virtually unhittable when it is right.
Report a correction or typo
Related topics:
sportsespnpostseasonmlbliam hendriksnew york yankeeswild card gamewild cardoakland athleticsal wild card gameopenerluis severinoamerican league wild card gamealwcamerican leagueplayoffs
Copyright © 2020 ESPN Internet Ventures. All rights reserved.
More Videos
From CNN Newsource affiliates
TOP STORIES
Inequity could slow CA's COVID-19 reopening process