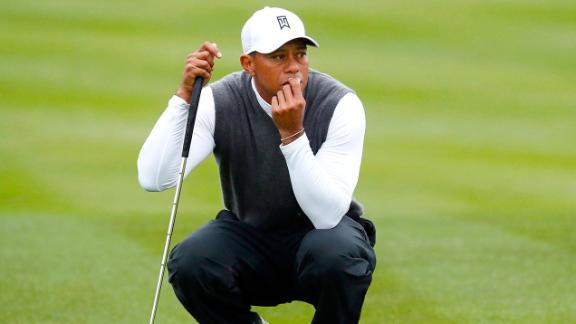 Tiger Woods played an 18-hole practice round at Augusta National on Tuesday, but his status for next week's Masters remains undecided, his agent said.

Woods, who has not played competitively since withdrawing from the Farmers Insurance Open on Feb. 5, announced a leave from the game the following week to work out the issues with his game.

"Tiger clearly is working hard and he will advise as to when he is ready to play competitively," said Mark Steinberg, Woods' agent, in an email.

Woods played with two Augusta National members and his caddie, Joe LaCava, was in attendance.

He is not required to commit to next week's Masters Tournament as he is an invited player and the event has no alternate list. The club traditionally announces its tournament groupings on Tuesday, two days prior to the start of the Masters.

"My play, and scores, are not acceptable for tournament golf," Woods said on Feb. 11. "Like I've said, I enter a tournament to compete at the highest level, and when I think I'm ready I'll be back."

Woods skipped tournaments he would have normally played, the Honda Classic and the ArnoldInvitational. He was not eligible for the WGC-Cadillac Championship.

A year ago today, Woods had back surgery to deal with a disk issue. He has played just seven worldwide events since, withdrawing from two and missing the cut in two others. He shot his highest score as a pro, an 82, in January at the Waste Management Phoenix Open and has dropped to 104th in the world, his lowest ranking since 1996.

Woods missed the 2014 Masters, the first time he had done so in 20 years. The four-time tournament champion last won the tournament in 2005.

If Woods does play next week, it would mark his longest layoff going into the Masters since 2010 when he returned to tie for fourth.

Tiger plays Augusta, undecided for Masters
Bob Harig reports the latest on Tiger Woods, who played an 18-hole practice round at Augusta National on Tuesday.