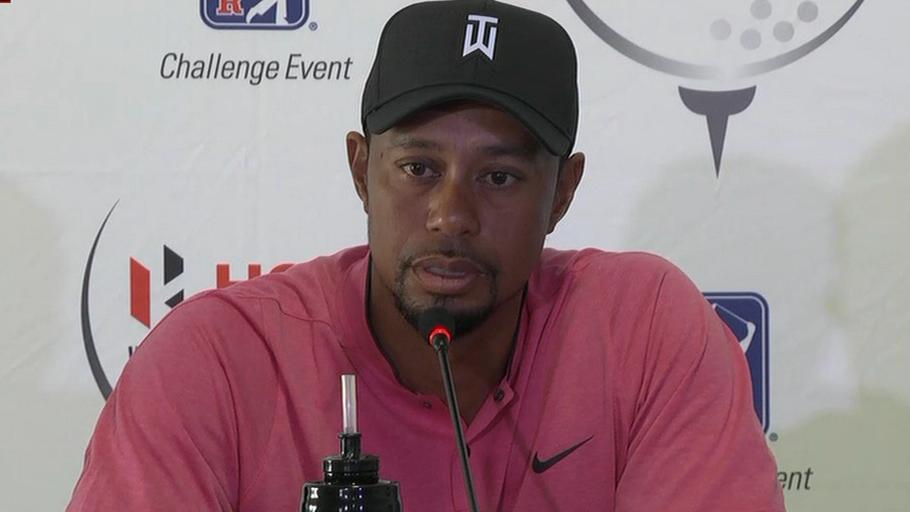 NASSAU, Bahamas -- His situation was so dire a year ago that Tiger Woods admitted on Tuesday that he feared never playing competitive golf again.

Woods spoke at a news conference at Albany Golf Club in advance of the Hero World Challenge, where the 14-time major champion is set to return after a 15-month absence because of two back surgeries and a lengthy rehabilitation and recovery process.

"Not being able to get out of bed, not being able to move, how can I expect to come out here and swing a golf club at 120 miles an hour and be ballistic when I can't even get out of bed?" Woods said. "So, yeah, there was a lot of trepidation and times where I thought ... was it realistic?

Woods was six weeks removed from the second of two back procedures in the fall of 2015. He was not allowed to swing a golf club and had yet to begin a serious rehabilitation program. His exercise was limited to walking, and Woods admitted that he could not "see the light at the end of the tunnel."

A year later, after an aborted return in early October at the Safeway Open, Woods, 40, says he is ready to compete in the annual tournament that benefits his foundation. And he has a much better outlook.

"Yeah, I can play," he said. "I can play, I can compete and hopefully I can get out there and shoot something."

Woods could not resist his usual mantra that he is here to win, but he acknowledged "that's going to be a tall order. I haven't played in a while. But hey, I'm going to give it my best. I'm going to be focused, I'm going to do what I can do and put the ball in the correct spots, give myself looks and try to bury these putts and post scores, and get myself in the mix come Sunday afternoon."

Woods is ranked 898th in the world and he is playing in a field that has no other player worse than 38th. Among those he is competing against are defending champion Bubba Watson, 2016 major winners Dustin Johnson, Henrik Stenson and Jimmy Walker, as well as Olympic gold medalist Justin Rose and U.S. Ryder Cup stars Rickie Fowler and Patrick Reed, who will be grouped with Woods on Thursday.

He has won the event five times, but two years ago, in his last appearance in the tournament, Woods finished tied for last.

The tournament is reserved for the defending champion, major winners and those ranked among the top 50 in the world, which prompted Woods to quip: "'The committee' allowed one player from outside the top 50 to get into the event."

Woods is actually afforded a spot because of his role as host of the event -- otherwise he would not be eligible. Because the event offers World Ranking points and has such a strong field, Woods is guaranteed to move up approximately 150 spots just for finishing four rounds.

And even that would be a victory for Woods, which he grudgingly acknowledges.

"I'm playing again, yeah," he said. "After 15 months of not competing ... last year at this time I gave you a different answer because that was the reality of it. I'm sitting here in front of you guys with a different reality because things have improved so much that I'm able to come back here and do this again. It hasn't been easy.

"People around me who know me -- my physicians, my friends, family -- they know how hard it's been to get to this point. It's taken a lot of work, but I'm here."

Woods touched on various other subjects, such as his new bag sponsorship with Monster Energy; previously reported facts about what will be in his bag this week; his desire to one day be a U.S. Ryder Cup captain but that he wants to "make the next team;" and how he set up the second phase of his career for beyond golf.

"But I want to do this as long as I can, as long as the body will allow me to," he said.