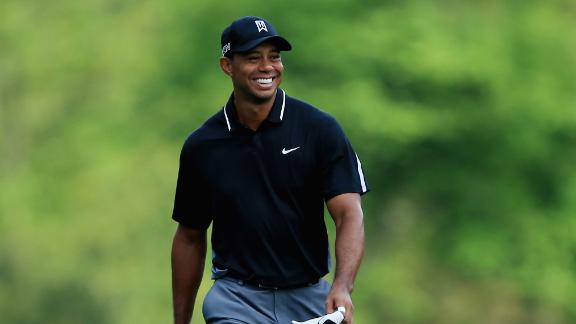 AUGUSTA, Ga. -- There was considerable and understandable conjecture about Tiger Woods' ability to make the 36-hole cut at the Masters.


After all, he didn't even say he would be playing in the tournament until a week ago.

But Woods made it to the weekend with ease, and while he is 12 shots behind runaway leaderJordan Spieth, Woods' 3-under 69 on Friday during the second round at Augusta National was a positive step after he returned to the game following a two-month break.


"Very proud of what I've done, to be able to dig it out the way I have," said Woods, who had four birdies and a bogey. "All the hard work that Chris [Como] and I and Rob [McNamara] have been putting into it, I told you guys on Tuesday, I was at a pretty low one in my career, but to basically change an entire pattern like that and put it together and put it in a position where I can compete in a major championship like this is something I'm very proud of."


Woods will be paired in the third round with Sergio Garcia, with whom he has a history. They will tee off at 1:15 p.m. ET.


Woods and Garcia's relationship became heated at the 2013 Players Championship and a few weeks later when the Spaniard made a racially insensitive comment related to Woods.


During the third round of the Players that year, the two were paired together and Garcia took issue with Woods for a perceived breach of golf course etiquette. Garcia felt Woods didn't do enough to quiet the crowd around him as Garcia was hitting a shot from the fairway.


A few weeks later, at a European Tour function, he was asked in jest if he would be inviting Woods to dinner during the next month's U.S. Open.


"We'll have him 'round every night," Garcia said. "We will serve fried chicken."


Garcia apologized publicly soon after and again when he saw Woods at the U.S. Open. They have played just once together since, at the 2013 BMW Championship during the third round, with Woods shooting 69 to Garcia's 66.


Garcia addressed the pairing in a tweet Friday night:

Woods' 69 on Friday was his first score in the 60s at Augusta National since a final-round 67 helped him make a charge to a tie for fourth in 2011. It was also just his second subpar round in a major championship in his last 15 rounds.


"He probably saw my name go up on the board, and he's like, 'I can't let the old man beat me; I better play good today,''' said 1998 Masters champion Mark O'Meara, whose 68 was a stroke better than Woods. "So I'm really happy for him. Maybe it's motivating him a little bit out there, seeing the old man's name up on the board.


"I've told everybody that he seems in a really good place mentally and physically. Listen, I see more of the old Tiger Woods, in my opinion. His pitching Monday and Tuesday, I didn't see any inclination of a guy that's struggling around the greens. What was going on before, I'm not sure. But he certainly looks like he's on his way back.''

Woods appeared to have just one dodgy chipping moment. After hitting his tee shot over the green at the par-3 sixth, his second shot failed to make it to the green. But he got it up and down from there for his only bogey of the day.


If anything, Woods let some opportunities slip on the greens. He had good chances for birdies at the third, fifth, 10th, 12th and 18th holes but also had excellent par-saving putts at the 14th and 17th holes.


"It was hard. You expect certain putts to roll out, but they're not rolling out. They just don't have quite the same rollout, and especially some of the downhill putts. We left a couple short coming down the hills, and so you've got to make the adjustments. And our group didn't really do a very good job of it. But honestly, Jordan is doing a great job of it.''


Woods has always lamented slow greens, and his inability to adjust to them Friday hurt his score. He could have easily been in the 66 range if he had converted a few makeable chances.


But for the second day, he hit 10 of 14 fairways. And he hit 14 greens in regulation, failing to get up and down for par just once.


This is Woods' first tournament since he withdrew from the Farmers Insurance Open with lower back stiffness Feb. 5. Since missing last year's Masters due to back surgery, this is just his eighth worldwide start; he has withdrawn from two tournaments and missed the cut in three others.