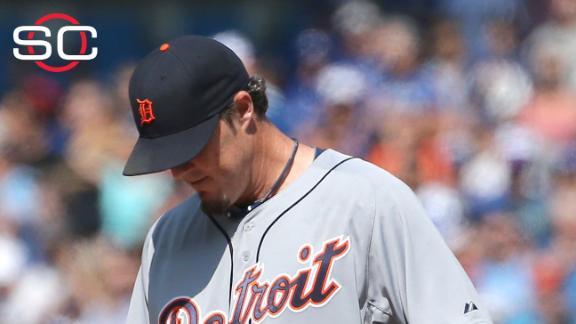 DETROIT --Tigers closer Joe Nathanwill miss the rest of the season with a torn ligament in his pitching elbow.

Nathan tore his ulnar collateral ligament Wednesday while pitching on a minor-league rehabilitation assignment with Triple-A Toledo. Hoping to show that he was ready to come off the disabled list, he tore both his previously strained flexor pronator and his UCL.

"I felt great for my first two hitters, but on the first pitch to the third batter, boom," Nathan said Thursday. "I guess I tore both of them on one pitch."

The 40-year-old Nathan, a six-time All-Star who is seventh all time in MLB with 377 career saves, would be having Tommy John surgery for the second time in five years.

Still, he wasn't ready to announce his retirement.

"I'm going to go at this 110 percent, just like I do anything, and I'm going into it with the goal of pitching again in the major leagues," he said. "If it doesn't work out that way, the surgery and the rehab will make my arm stronger for the rest of my life, but that's not how I'm thinking about it."

Nathan will make $10 million this season, but the Tigers are expected to buy out his 2016 option for $1 million. That would leave him at 41, without a team and unable to pitch in spring training.

"I know this is going to be a long grind," he said. "I've had Tommy John surgery before, so I know what I'm facing there, but this time I have also torn the flexor, so it is a bigger deal. I'm just going to be patient and do what I need to do."

Said Tigers manager Brad Ausmus on Wednesday: "It hurts. We're a better bullpen with Joe in it, no question."