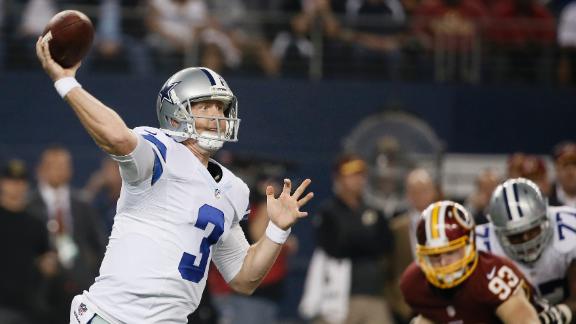 IRVING, Texas -- Tony Romo did not take part in Thursday's walkthrough and will not practice, but Dallas Cowboys coach Jason Garrett remains hopeful the quarterback can play in Sunday's game against the Arizona Cardinals.

"He's not ruled out for this game by any means," Garrett said. "He's getting himself mentally ready. He's in the meetings. He's a part of our football team, and hopefully as the week goes on, it feels better and he can function and it'll give him a chance to play."

Romo, who did not practice Wednesday, is recovering from a hit to his back in the third quarter of Monday's loss to the Washington Redskins. He was able to return to the game, but said Wednesday that the pain level was "pretty similar" to how he felt after the game.

The Cowboys and Romo have said the injury is not disk-related and not connected to the surgery he had last December. Garrett said the initial reports back from the medical staff were that Romo could need a "few days."

Romo said if the question is only about pain tolerance, then he would play if he could show during the week that he can move around and function. When asked if the Cowboys are calling Romo's injury a bone contusion, Garrett said, "Yeah, I think that's the best way to describe it."

Romo wore a kevlar vest for added protection when he played through a cracked rib and punctured lung in 2011. Garrett said the team is looking into possible modifications to the quarterback's pads if he can play Sunday.

"Just talking to him, it just sounds like he's feeling better," Garrett said. "Typically that happens. The further away you are from an injury, hopefully the better it gets. You get some blood flowing through your body. So hopefully he's able to do something today, and we can build on that."

If Romo can't play, Brandon Weeden would make his first start for the Cowboys. He filled in for two series against the Redskins, completing 4-of-6 passes for 69 yards and a touchdown. Undrafted rookie Dustin Vaughan would serve as the backup.

Garrett: Romo Not Ruled Out
ESPN Cowboys reporter Todd Archer discusses coach Jason Garrett's plan of preparing QB Brandon Weeden for Sunday, but keeping the option open for Tony Romo if he is able to play.

Romo: Taking It Day By Day
QB Tony Romo discusses the back injury he suffered in the Cowboys' Week 8 loss to the Redskins and how much pain he is feeling.