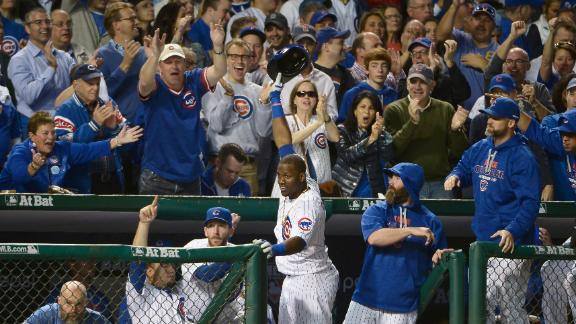 From Carlos Correa to Yoenis Cespedes, baseball's sluggers put on quite a show.

There were 21 home runs, a record for one day of postseason play. The last was a three-run shot by Howie Kendrickfor the Los Angeles Dodgers in the ninth inning of the team's13-7 NL Division Series loss to the New York Mets.

Cubs rookie Kris Bryant, who hit a two-run shot off Michael Wacha, found it hard to count all the home runs in that game.

"Everybody is smiling, obviously," Bryant said. "It's fun when you hit -- what was it? -- I think it was six home runs or something."

"It's really cool to see,'' said the Mets'Travis d'Arnaud, who hit a two-run homer. "It's good for the fan base.''

While this is an era of pitching and defense, Mets manager Terry Collins is a fan of the long ball.

"When we hit home runs, we think we got a big chance to win,'' he said. "It's all about trying to get on base and then have somebody up there that can hit something into the seats.''

The previous postseason record for home runs was 15, set Oct. 3, 1995, according to STATS. Like Monday, there were four postseason games on that day 20 years ago.