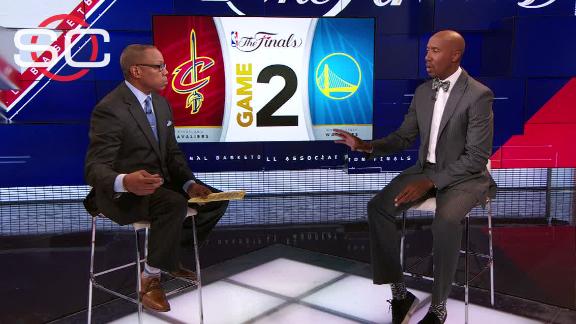 OAKLAND, Calif. -- Cavaliers coach Tyronn Lue is pushing LeBron James to pick up the pace in Game 2 of the NBA Finals in hopes it can jump-start an offense that struggled in a Game 1 loss to the Warriors.

James put up a strong stat line with 23 points, 12 rebounds and nine assists in Thursday's Game 1. But the Cavs scored only 89 points, and their offense lacked the flow that saw them rip through the Eastern Conference playoffs with a 12-2 record. The Warriors slowed them with their ability to switch defenders and force the Cavs into deliberate isolation sets. Twice in the first half the Cavs were called for 24-second violations, which is rare for them.

Lue held an extensive film session Friday, and his message was clear to his players: They must increase the speed of their offensive movement, because playing slowly is what the Warriors bait opponents into.

Lue's message was reminiscent of January, when his first order of business when taking over the coaching job from David Blatt was to make a point of the Cavs' need to put their foot on the gas. It contributed to the Cavs turning into the No. 1 offense in the league in terms of efficiency over the last two months of the season.

"They make you stagnant and make you play one-on-one basketball because that's all you can get," Lue said. "So if we pick up the pace and play with a faster tempo offensively, I think we'll be fine."

James repeatedly tried to take advantage of what he thought were mismatches but sometimes got bogged down, especially around the rim with Draymond Green or Andre Iguodala on him. He also had four of the Cavs' 17 turnovers.

"Coach has given us a game plan, and we need to execute it," James said. "If coach feels like we need to play faster, then we do. We've got to push the tempo a little bit more offensively, see if we can get down, get some easy baskets and get to the flow of our game. It's been a good thing for us throughout the whole season once Coach Lue took over, so we need to do that."

The Cavs, who have been setting 3-point records, made only seven in Game 1. Lue hinted he would increase shooting specialist Channing Frye's minutes after Frye played only seven in the opener.

Despite getting outscored 45-10 in bench points and not taking advantage of Stephen Curry and Klay Thompson being held to 20 points combined, the Cavs insisted they remained positive they could make adjustments for Game 2.

"I think we're in a good place psychologically and mentally," said Kevin Love, who had 17 points in Game 1. "We remain calm, but also know that this next game is huge for us."